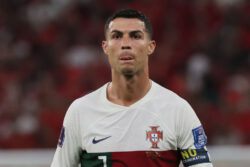 Cristiano Ronaldo’s proposed move to Saudi Arabian side Al Nassr is expected to be completed imminently as big European sides are not ready to make an offer to the free agent.

The 37-year-old is available on a free after leaving Manchester United and there has been an enormous offer on the table from Al Nassr for some time, worth around £175m-per-year.

The veteran forward has been holding out for more offers, preferring to play in the Champions League if possible, but there have been no offers from European giants forthcoming.

The Times reports that Ronaldo’s toxic exit from Old Trafford and being dropped by Portugal at the World Cup has put off European clubs from making a move for him.

Due to his advancing years and enormous wages, Champions League clubs have decided that he is not worth the investment, even without a transfer fee involved.

The likes of Chelsea, Napoli and Bayern Munich had been mooted as possible destinations for the legendary striker, but they have all backed away.

Ronaldo has also reportedly been offered a deal to play in the Qatar Stars League, but the proposal from Saudi is much more lucrative and Al Nassr looks set to be his next club.

It had been reported that Ronaldo had already agreed a deal to move to Al Nassr earlier this month, but asked whether that was correct while Portugal were still in the World Cup, he said: ‘No, that’s not true — not true.’

With options elsewhere not materialising, though, it appears that Al Nassir will get their man and an announcement is expected in the coming days.

It is a very lucrative deal.