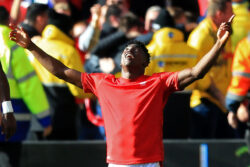 Taiwo Awoniyi’s goal against Liverpool was only his second for Nottingham Forest (Photo: Getty)

Jurgen Klopp says he is happy for Nottingham Forest star Taiwo Awoniyi after the ex-Liverpool youngster scored the winner against his former club on Saturday.

Forest stunned Liverpool 1-0 at the City Ground, with Awoniyi’s 55th minute strike enough to seal all three points and lift Steve Cooper’s side off the bottom of the table.

The Nigerian striker was on the Reds’ books from 2015 to 2021, but never played a minute for Klopp’s team, instead spending his time out on loan at various clubs across Europe before finally being sold to Union Berlin.

After a very successful season in the Bundesliga, he returned to England in the summer and has had a decent start to life at Forest, especially in the context of their struggles.

‘He has arrived where he belongs and I am happy for him, but not today so much.’

Awoniyi meanwhile was jubilant at full-time, saying: ‘To score against Liverpool is a day I will never forget.

The City Ground has ERUPTED! pic.twitter.com/1O52sduvcZ

‘I will always to be grateful to Liverpool for scouting me from Nigeria when I was 18 and scoring against them is amazing. I was always looking forward to the game against Liverpool and it was emotional.

‘It was a good game for the team. We had a plan to play compact and to find a way to score and at the end we won. I’m very happy about it.

‘As a team we’ll stick together like a family and we have to thank the fans because they were with us and we just have to keep on going.

‘This kind of game we have to look back on it and build on it. Now we concentrate on the next one.’

The former Liverpool youngster scored the winner for Nottingham Forest.