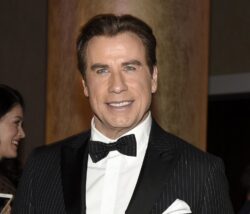 John Travolta and his daughter Ella Bleu had a glorious time ringing in the new year.

The actor and his daughter filmed a sweet New Year’s message for the Grease star’s 4.7 million Instagram followers on Sunday.

Sitting opposite each other at a table, John and Ella beamed from ear to ear as they told the A-lister’s fans ‘We love you and happy New Year,’ in unison.

Doting dad John, 68, captioned his post ‘Happy New Year everyone!’ and made sure to tag his 22-year-old daughter in the heartwarming clip.

Ella is one of the three children John shared with his late wife, Kelly Preston, who died in 2020 following a breast cancer battle.

Tragedy struck in 2009 while the Travoltas were holidaying in the Bahamas and Jett, who was just 16 at the time, died after suffering a seizure and hitting his head on a bathtub.

Just over a decade later, Preston died at the age of 57 in July 2020 after battling breast cancer.

The doting mum would have turned 60 this past October, a milestone John marked with a touching social media tribute.

Taking to Instagram to share a photo of himself with Preston on a red carpet, the widower wrote: ‘Happy birthday to my favourite dance partner! We love you and miss you Kelly.’

The couple had been married for over 28 years before Preston’s death, after meeting on the set of the comedy film The Experts, which was released in 1989.

John and Kelly had been married over 28 years (Picture: PAT/ARNAL/Gamma-Rapho via Getty Images)

John had shared the news of Preston’s death, telling fans on social media: ‘It is with a very heavy heart that I inform you that my beautiful wife Kelly has lost her two-year battle with breast cancer.

‘She fought a courageous fight with the love and support of so many. Kelly’s love and life will always be remembered.’

The star often uses his social media platforms to share insights into his family life and shout out his children, particularly Ella.

Back in 2018, when John starred alongside his daughter in the movie Poison Rose, he was quick to sing his daughter’s praises, writing alongside a photo of Ella on set: ‘First day of shooting with my daughter Ella Bleu for the film Poison Rose.’

And when Ella showed off her singing chops while promoting her EP in 2021, John publicly hailed his daughter’s talent beneath one of her Instagram posts, exclaiming: ‘I’m so very proud of you Ella, it’s amazing. Your thrilled Dad!’ Dad goals or what?


MORE : Why is Good Morning Britain not on today?