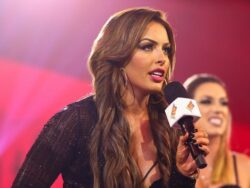 Mandy Rose is no longer with the wrestling giant (Picture: WWE)

It’s been nearly three weeks since Mandy Rose was released by WWE but she ended the year on a high by becoming a millionaire.

The former NXT Women’s Champion lost her title on December 13 and was then fired by the wrestling giant due to the risque content she’s been posting on her FanTime subscription page.

FanTime shared a post hailing her achievement alongside a professional shot of Mandy posing in her wrestling gear, and wrote: ‘Congratulations to @mandysacs for making 1 Million $$$ in a month! Finished 2022 like a champ 🔥 💪’

Although the 32-year-old star is yet to directly address her departure, she did take to Instagram over the festive period to thank her followers for their support.

She said: ‘Merry Christmas to all! 🎁🙏🏻Really appreciate the abundance of love & support I’ve gotten the last couple weeks’.

Mandy Rose (middle) was a dominant force in NXT as part of Toxic Attraction (Picture: WWE)

And in a reflective post on New Year’s Eve Mandy, whose brother Richard died in October aged 40, admitted there had been some ‘severe’ ups and downs over the past 12 months.

She wrote: ‘Wow … what a year it’s been honestly … the severe HIGHs and LOWs .. but I’m grateful and blessed for everyone that has been there for me and everything always happens for a reason! 🙏🏻❤️🍾

Mandy, who got engaged to fellow wrestler Tino Sabbatelli in September, first joined WWE in 2015 after appearing on reality show Tough Enough, where she was the runner up to late winner Sara Lee, who tragically died earlier this year aged 30.

Mandy made her main roster debut in 2017 and would appear on both Raw and SmackDown before moving to NXT, regarded as WWE’s developmental brand, last summer and enjoying a career resurgence.

She held the NXT Women’s Title for 413 days before losing the gold to Roxanne Perez before getting released.


MORE : AEW’s Saraya, AKA Paige, praises Sasha Banks for ‘knowing her worth’ by walking out on WWE

It was a rollercoaster end to the year.