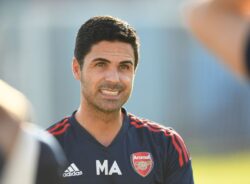 Jamie Redknapp has warned Arsenal boss Mikel Arteta over a ‘major problem’ at the club as the Premier League gets back up and running.

Following the conclusion of the World Cup in Qatar, top-flight action restarts on Monday as the Gunners host West Ham at the Emirates.

Arteta’s side find themselves top of the league heading into the fixture and are five points clear of second-placed Manchester City.

But Arsenal suffered a huge blow during the World Cup, with star striker Gabriel Jesus set for a lengthy spell on the sidelines through injury.

Jesus only arrived at the Emirates this summer in a £45m deal from City but the Brazil international has already established himself as a key player.

The 25-year-old has registered five goals and six assists across his opening 14 Premier League games for the Gunners.

Redknapp feels that Jesus’ injury has put Arsenal at a huge disadvantage heading into the second half of the season.

Gabriel Jesus is expected to be ruled out until March (Picture: Getty)

‘The biggest disadvantage by far is Arsenal because of losing Jesus,’ Redknapp told Sky Sports. ‘What that would do to the team, only time will tell.

‘I think right now, that’s a major problem for Mikel Arteta. He would have looked at that and thought ‘out of all the players I didn’t want to lose, it would have been him’.

‘It’s not his goals, it’s more what he does for the team. He goes and chases and presses. Wins the ball. Sets the tempo as a striker. He’s a player they haven’t had for so long. And that’s terrible news for this Arsenal team.

‘How are they going to react? You are going to buy someone in the window. It’s not as easy as that to find a player of his calibre.’

Eddie Nketiah is expected to replace Jesus and Arteta is confident the Hale End academy graduate, who signed a long-term deal in the summer, can fill the void.

Arteta has also hinted at the possibility of redeploying Gabriel Martinelli as a centre forward.

‘The biggest disadvantage by far is Arsenal…’