I’m A Celebrity…Get Me Out of Here! ditches luxury Versace hotel after 18 years 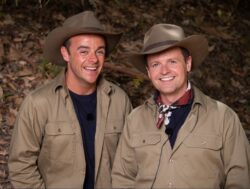 Ant and Dec are back again to present the series (Picture: ITV/Shutterstock)

I’m A Celebrity… Get Me Out of Here! makers have axed the iconic Palazzo Versace Hotel in favour of alternative accommodation on the Gold Coast.

The hit reality TV show, hosted by Geordie duo Ant and Dec, will be returning to Australia for the first time in three years after the pandemic.

Among the famous faces rumoured to be camping with the creepy crawlies are royal Mike Tindall, footballer Jill Scott and Boy George, who is said to be the highest-paid star ever.

But before being subjected to Buch Tucker Trials and being forced to contend with the rainforest’s elements, the celebs would enjoy a few nights of luxury and relaxation after landing in Oz.

Stars would famously stay at the five-star Versace hotel as they get to grips with the juggernaut series, which costs upwards of £250 a night for a room, prior to entering the jungle.

However, a show source has confirmed to Metro.co.uk that for the first time in 18 years, the celebrities, who include Love Island’s Olivia Attwood, will be checking into a different resort.

They said the change in accommodation was to ‘refresh’ the programme, which has seen the likes of Made In Chelsea’s Georgia Toffolo crowned Queen of the Jungle.

Olivia and Chris have been seen touching down in Oz (Picture: ITV/REX/Getty)

The insider explained: ‘We’re constantly looking at ways to refresh the show and being away from Australia during the pandemic gave us the opportunity to look at all aspects of the show including the hotel the celebrities stay in upon their jungle exit – for the new series we’ll be using a different hotel on the Gold Coast.’

According to The Sun, the stars will instead be checking into the JW Marriott Gold Coast Resort, where rooms start at £256.

In other I’m A Celeb news, ITV has revealed the the launch episode set to air on Sunday, November 6 at 9pm.

In the run-up to the premiere, Chris Moyles, who is poised to send secret messages to viewers using a bracelet, was spotted at Brisbane Airport.

Olivia will be the first Love Islander on I’m A Celeb (Credits: James Gourley/Shutterstock)

Coronation Street actress Sue Cleaver, who plays Eileen Grimshaw on the ITV soap, is the most recent celebrity photographed touching down in Oz, having been pictured on Wednesday morning.

However, the new series I’m A Celeb hasn’t been without its obstacles with the set being forced to close for 24 hours due to a weather warning.

An ITV spokesperson said: ‘We closed [the] site for 24 hours as a precautionary measure due to the inclement weather.’

I’m A Celebrity…Get Me Out of Here! returns on ITV on Sunday, November 6 at 9pm.


MORE : I’m A Celebrity 2022 cast: Who are the rumoured contestants?

The campmates will be staying elsewhere on the Gold Coast.