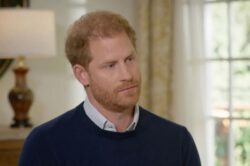 Prince Harry has accused the royal family of failing to defend his wife, Meghan Markle, after Jeremy Clarkson’s horrific article in The Sun newspaper.

In the ITV interview with his friend and journalist Tom Bradby, Harry said the “silence is deafening” and contrasted the Palace’s reaction with the quick action taken after the race row at a Buckingham Palace reception.

The article by Clarkson was condemned across the nation – but the palace stayed silent. Even Jeremy Clarkson’s daughter slammed the written piece, the Sun removed the article and Clarkson acknowledged his article had upset the public. Neither apologised to Meghan Markle. Harry described the article as “horrific and hurtful and cruel towards my wife”.

“The world is asking for some form of comment from the monarchy. But the silence is deafening. To put it mildly,” he said.

“Everything to do with my wife, after six years, they haven’t said a single thing.”

Harry also goes on to say he does not believe comments about his son’s skin tone, by an unnamed royal, were racist.

Harry contrasted the lack of response from the palace over the Clarkson article with the events that followed a Buckingham Palace reception where Lady Susan Hussey and Ngozi Fulani – a black British charity founder, had an encounter.

Fulani was repeatedly asked where she was “really from” amongst other insulting and uncomfortable moments. The controversy leads to a rapid response from Buckingham Palace and a personal meeting between the two women.

Lady Susan Hussey apologised and the palace released a statement saying that her remarks were “unacceptable and deeply regrettable.” Hussey resigned as a lady of the household.

Harry notes him and Meghan are fond of Lady Hussey and said “she had never meant any harm at all.”

Where to buy Harry’s book Spare?

The book will be published by Penguin Random House on 10 January 2023. The publication date is just three days after the three-year anniversary of Harry and Meghan quitting the royal family.

The publisher – Penguin Random House, said Spare is Harry’s side of the story about his life in the royal family. The book starts in the days around the death of Princess Diana and is said to be written with “raw, unflinching honesty.”

Speculation and rumours suggest it will be a bombshell for the royals, but it’s Harry’s chance to tell his story.

Whether the royals respond is unclear. It’ll depend on how damaging the book is. There were rumours the documentary would be explosive, but this proved to be untrue. So the only way to really know will be to buy the book.

How to pre-order Prince Harry’s book?

Spare is available to pre-order from all major book retailers, including Waterstones, Amazon and WHSmith.