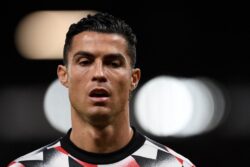 Liverpool legend Graeme Souness feels it is ‘desperately sad’ to see what Manchester United have ‘reduced Cristiano Ronaldo to’ as he blames the club and manager Erik ten Hag for the situation with the veteran superstar.

Ronaldo is increasingly frustrated about his lack of opportunities in the starting XI under Ten Hag and things came to a head this week during United’s 2-0 win over Tottenham.

The 37-year-old refused to come off the bench late on at Old Trafford and then walked down the tunnel before the game had finished.

He has now been left out of the squad for the trip to Chelsea on Saturday evening as punishment, but Souness feels the whole situation is a bad reflection on the club rather than the player.

Ronaldo was pushing to leave United over the summer and the Scot thinks he should have been allowed to move rather than the Red Devils hanging on to him and then using him sparingly, a role not befitting someone of the forward’s stature – according to Souness.

‘It’s a desperately sad situation that Cristiano Ronaldo finds himself in,’ Souness wrote in the Daily Mail. ‘Here is a player who has taken Manchester United to the heights and scored goals for them which will live long in the memory — yet look what that club have reduced him to.

‘This is a situation entirely of United’s making. A problem they just didn’t need to create. Erik ten Hag has made some bold and courageous decisions, trying to instil discipline and unity. But how did he think this situation with Ronaldo was going to work?

The relationship between Ten Hag and Ronaldo is not working out brilliantly (Picture: REUTERS)

‘Ten Hag and United have shot themselves in the foot and not helped themselves one bit.’

Souness feels it is appropriate that Ronaldo is being punished for refusing to come on against Spurs, but also that his reluctance to play just a handful of minutes is understandable.

The former Liverpool captain and manager thinks something needs to change – either Ronaldo to be picked or allowed to leave – or his great legacy at Old Trafford will be in danger.

‘For Ronaldo to have refused to come on to the pitch when requested by Ten Hag is clearly something the manager cannot accept. Such a fundamental breach of the team ethic is the first step on a road to ruin,’ said Souness.

‘But it is not hard to imagine how the conversation went between the two of them when changes were being made and he was asked to go on after 87 minutes, to run down the clock. A three-minute role at the dog-end of a 2-0 win is an indignity that this player will not have expected to be reduced to.

‘If this continues, United will end up destroying Ronaldo’s legacy. The least the club owe him is not to allow that to happen. To stop putting him through this.’


MORE : Marseille president aims dig at Cristiano Ronaldo as he rules out a move

‘Look what that club have reduced him to.’