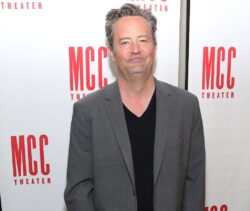 Matthew Perry became a household name thanks to his stint in Friends (Picture: WireImage)

Matthew Perry recalled being taken to rehab at the pinnacle of his Friends career, amid his addiction battles.

The 53-year-old, who played Chandler Bing, became a household name due to the hugely successful sitcom, alongside Jennifer Aniston, Matt LeBlanc, David Schwimmer, Lisa Kudrow and Courteney Cox, but was struggling with alcohol and painkiller addictions behind the scenes

Ahead of the release of his candid memoir, Friends, Lovers and the Big Terrible Thing, the actor reflected on his time in front of the camera, revealing that he was taken to receive treatment shortly after filming one of his biggest scenes on the series – Chandler and Monica Geller’s wedding in season seven.

In the pages of his upcoming book, which is hitting shelves this week, he spoke candidly about how his co-stars approached him about his issues.

Matthew revealed that Jennifer once appeared in his trailer, telling him ‘in a kind of weird but loving way,’ that they knew he was drinking once again, and that ‘we can smell it’.

‘The plural “we” hits me like a sledgehammer,’ he penned, via the New York Times, explaining that the cast confronted him in his dressing room on another occasion.

Chandler and Monica got married in the finale episode of season 7 (Picture: NBC)

Discussing his character’s wedding to Monica Geller, played by Courteney, he continued: ‘I married Monica and got driven back to the treatment center — at the height of my highest point in Friends, the highest point in my career, the iconic moment on the iconic show — in a pickup truck helmed by a sober technician.’

Speaking to the publication, the 17 Again actor explained that his substance abuse issues began as a teenager, drinking beer and wine when he was 14, before moving to vodka and prescription drugs.

At one point, he was taking 55 Vicodin – a strong painkiller – a day while filming, and didn’t ‘know how to stop’.

‘I would fake back injuries. I would fake migraine headaches. I had eight doctors going at the same time,’ he told the publication. ‘I would wake up and have to get 55 Vicodin that day, and figure out how to do it. When you’re a drug addict, it’s all math.

Matthew also revealed that his co-stars rallied around him (Picture: NBC)

‘I wasn’t doing it to feel high or to feel good. I certainly wasn’t a partier, I just wanted to sit on my couch, take five Vicodin and watch a movie. That was heaven for me. It no longer is.’

Matthew endured a nearly fatal health scare in 2018 which almost cost him his life – when his colon burst from opioid misuse.

At one point, doctors informed his family that he had ‘a 2 percent chance to live’, but he fought for his life in a coma for two weeks, and spent many more months in hospital.

He has been working hard on his sobriety for the last 18 months, and is hoping that his stunningly honest depiction of his lowest points could help encourage others to get the help they need.

Friends, Lovers, and the Big Terrible Thing is released on October 28.

Frank offers confidential advice about drugs and addiction (email [email protected], message 82111 or call 0300 123 6600) or the NHS has information about getting help.

Adfam has local groups for families affected by drugs and alcohol and DrugFam offers phone and email support to people affected by other people’s drug or alcohol misuse.


MORE : The Masked Dancer’s Adam Garcia ‘really disappointed’ after placing runner-up: ‘I was annoyed with myself’