Fern Britton breaks down in tears remembering her late mum while visiting childhood home: ‘She was a goddess’ 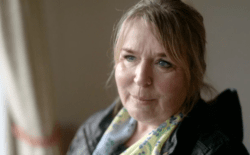 Fern Britton became emotional as she took a trip down memory lane when she revisited her former family home in Buckinghamshire.

The former This Morning presenter, 65, returned to Chalfont St Peter for Channel 5 docuseries No Place Like Home, which follows stars as they return to their old childhood haunts.

The presenter, who was previously married to Phil Vickery, was featured in Wednesday night’s episode of the nostalgic series, which saw her go back to her former bedroom.

Remarking that she had a ‘big room’, Fern then opened up about her family life, having been raised by actor Tony Britton and his first wife Ruth Hawkins.

‘I didn’t know what was going on in the family at that stage. I just knew that it was my mum and me and my sister here. And that my father didn’t live here because he was always working. I was told some convoluted stories about why he wasn’t here.

But it was odd in those days people didn’t tell you things. My mother was, as you can imagine, everything. She was a mother and father to me, which is why I can tell you lots of stories about her.

Fern Britton said she ‘didn’t know’ what was going on in her family (Picture: Channel 5)

Fern Britton looked back fondly at her mother (Picture: Channel 5)

‘And how,’ Fern continued, tearing up, before saying ‘sorry’ for choking up. ‘How strong she was and how hard she worked to keep this all together and how much I adored her.

‘She was a goddess, you know?

Fern previously shed further light on her family origins when she revealed she had a long-lost family member, her nan’s secret child.

A picture of a young Fern with her mother, father and sibling (Picture: Channel 5)

She had found out her nan had had a baby out of wedlock which she had given away when he got in touch after seeing her on TV when she was 23.

Fern told Good Housekeeping magazine: ‘I had started in TV, working in Plymouth, when I received a letter from a man who had seen me on screen, asking if I was Ruth Britton’s daughter.

‘When I wrote back to say that I was, he replied saying, “I know this sounds extraordinary, but I think I am your mother’s half-brother”.’

She discovered her grandmother, Beryl, had had a child out of wedlock before the First World War and had given him up to be fostered.

Fern explained: ‘In secret, Beryl had arranged a private fostering for him and continued to see him, love him, and send whatever money she could spare for his keep.

‘It must have been very difficult, because by then she had married my grandfather, Gerald, and went on to have three children.’


MORE : Fern Britton told ‘there’s no job for you’ on This Morning if she didn’t return ‘straight after having baby’