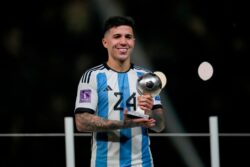 Benfica have warned Enzo Fernandez that joining Chelsea would be the ‘wrong move’ for his career, according to reports.

Fernandez has quickly emerged as Chelsea’s top midfield target for the January transfer window but the Premier League club have been reluctant to meet the midfielder’s €120 million (£106m) release clause.

According to The Times, Benfica are unhappy that Chelsea’s latest offer is less than the amount discussed during talks last month.

The report also claims that Benfica’s president, Rui Costa, has held talks with Fernandez and has warned the midfielder against joining Chelsea this month and has said that ‘more prestigious and better organised’ teams will make their move in the summer.

However, it’s understood that Fernandez has made it clear to Costa that he wants to make the move to Chelsea in January.

Meanwhile, Benfica’s head coach Roger Schmidt slammed Chelsea and has accused the club of ‘disrespect’ in their approach for Fernandez.

‘Enzo is a good guy and an extraordinary player, we want him to stay, the situation is not easy, he played in the World Cup, won the World Cup, had proposals, there is a lot of money at stake,’ Schmidt on Thursday.

‘He is a young man player, this is confusing, we all understand this. But he is an excellent person.

‘He was not authorised to go to Argentina, it is not acceptable, there will be consequences, I will not say which ones.

‘We do not want to sell him, neither I nor the president. we know that there is a release clause, if he wants to leave and someone violates the clause, maybe we lose the player.

‘There is a club that wants him, they tried to attract him, but they know that they can only have him if they pay the clause. It’s disrespectful to all of us, to Benfica, they’re driving the player crazy, they pretend they want to pay the clause and then they want to negotiate.’

Benfica are not happy with Chelsea’s conduct.