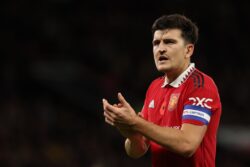 Harry Maguire has missed Manchester United’s Carabao Cup clash against Burnley due to illness while Diogo Dalot is sidelined through injury.

United resume their campaign following the World Cup break with their round-of-16 tie against Burnley at Old Trafford.

Raphael Varane and Lisandro Martinez miss the game having played in the World Cup final on Sunday, but Ten Hag is also without Maguire and Dalot, who suffered an injury in Portugal’s defeat to Morocco in the World Cup quarter final last week.

With Varane, Martinez and Maguire all unavailable, Ten Hag opted to play Casemiro in central defence alongside Victor Lindelof.

‘Dalot had some complaints, he felt them during his last game with Portugal and Harry unfortunately is ill,’ Ten Hag said before United’s clash with Burnley.

‘We picked Casemiro as he has played more often there, but also Luke [Shaw] has also [offered] to play there too which is really good.

‘They are all committed and they want to play, they are hungry and I like that.

‘Also, last week, Rhys Bennett played against Everton [behind closed doors] and he did really well, so we have options there, but tonight Casemiro will play there.’

Casemiro has been forced to play in central defence.