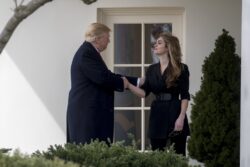 A former White House aide said that then-President Donald Trump made her and other staffers ‘look like domestic terrorists’ during the Capitol riot.

‘In one day he ended every future opportunity that doesn’t include speaking engagements at the local Proud Boys chapter,’ Hicks texted Radford on the day of the riot.

Hicks continued: ‘And all of us that didn’t have jobs lined up will be perpetually unemployed. I’m so mad and upset. We all look like domestic terrorists now.

‘This made us all unemployable. Like untouchable. God I’m so f***ing mad.’

Radford replied that she had ‘been crying for a hour’ and said, ‘I know, like there isn’t a chance of finding a job.’

In addition, Radford admitted that she had gotten a ‘blow off email’ from Visa and lost the employment opportunity.

The text exchange between Hicks and Radford was part of a series of documents released by the committee that go along with its recently published final report.

Hicks also texted that former White House Director of Strategic Communications Alyssa Farah Griffin looked like a ‘genius’ for resigning about a month before the attack on the Captiol.

Hicks exited the White House for the second time on January 12, 2021. According to CNN, she had planned her departure before the riot.

The documents complementing the final report were disclosed a day before the committee dissolves on Tuesday when Republicans take control of the House.

In its final meeting on December 6, the panel issued four criminal referrals against ex-President Trump to the Justice Department, which has its own probe into the insurrection.