Davina McCall calls on Ant and Dec to join The Masked Singer judging panel, and we’re here for it 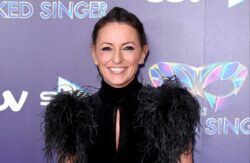 Davina has set her sights on the Geordie duo (Picture: WireImage)

The wild and wacky series is back for a fourth series with Joel Dommett overseeing the madness with Davina, Mo Gilligan, Rita Ora and Jonathan Ross returning as judges.

Fans have witnessed several celebrities take to the stage, however, the former Big Brother presenter believes a certain Geordie duo will make a sensational addition.

When asked about her ideal co-judge, she said: ‘It’s got to be someone who gets the madness of it.’

‘We had Stephen Mulhern on the new series and he was joyous, because he just kept going, “what is going on?This is the weirdest programme I have ever worked on!”’

‘I think Ant and Dec would find it hilarious, so they would be great,’ she added to OK! magazine.

It’s got to be someone who gets the madness of it,’ says Davina (Picture: ITV)

Chris Kamara was unveiled as the first celeb in the latest series (Picture: ITV)

The programme, which returned on New Year’s Day, sees 12 celebrity acts sing while disguised in extravagant and outrageous costumes, as a star panel tries to guess their identities.

Football pundit Chris Kamara became the first celebrity to be unmasked on the new series of ITV1’s reality singing contest and was underneath the Ghost costume.

Taking to the stage, Chis performed Save the Last Dance for Me by The Drifters and managed to throw judges Rita Ora, Davina McCall, Mo Gilligan, and Jonathan Ross off scent over his identity by putting on a Scottish accent.

Is this the end for Mrs Brown’s Boys? Even ardent fans think it’s had its time

As a result, they were convinced that the likes of Love Island presenter Iain Sterling or Dr Alex George was under the mask.

Next Saturday, the remaining characters – Fawn, Jacket Potato, Piece of Cake, Pigeon, Rhino and Rubbish – will be taking to the stage to sing in disguise and try to stump the panel and viewers.

The Masked Singer returns to ITV Saturday at 7pm.


MORE : Davina McCall’s hairdresser boyfriend reveals the truth about her new fringe in behind the scenes Masked Singer video

They would be great!