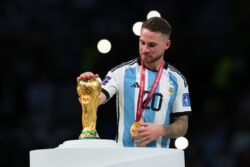 World Cup winner Alex Mac Allister says he is in no rush to leave Brighton amid links to several big clubs, including Arsenal, Chelsea and Liverpool.

Mac Allister emerged as one of Argentina’s best players at Qatar 2022, and has seen his reputation go through the roof having quietly impressing with the Seagulls over the last few years.

As a result, the midfielder has been linked with many top clubs, not only in the Premier League but across Europe.

As well as the aforementioned trio, Manchester United, Tottenham, Juventus and Barcelona are also said to be interested in his services.

Unsurprisingly, Brighton are not interested in selling their star player, who was welcomed back to the Amex on Monday with much applause from his teammates and club staff.

The 24-year-old has now spoken out about the transfer news surrounding him, and its bad news for anyone who wants to sign him.

‘They know how grateful I am to this club and I don’t have any rush to leave.

‘So yeah, I’m just focused on Brighton and I will do my best tomorrow.’

Mac Allister joined Roberto De Zerbi’s side back in 2019 for £11million and has played 86 times for the Seagulls so far, making 19 goal contributions.

His contract with the Seagulls runs until 2025 and the club have the option to extend that by another year.