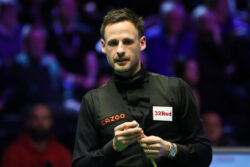 David Gilbert gets an unexpected crack at the Masters (Picture: Getty Images)

David Gilbert will take Yan Bingtao’s place in the Masters next month after the Chinese star’s suspension amid the ongoing match-fixing investigation in snooker.

Yan, who won the Masters on debut in 2021, was suspended from World Snooker Tour events on 12 December and now the 14-day window to appeal the suspension has closed.

Therefore the next player in the rankings at the cut-off point for the Masters takes his place in the draw, so Gilbert steps in as he was number 17 in the world at that point in November.

This gives the Angry Farmer a clash with three-time world champion Mark Williams in the opening round, which will be on 10 January at Alexandra Palace.

Gilbert has played in the Masters twice before and reached the semi-finals on both occasions, so despite not being in the best form this season, he will be relishing the chance to return to Alexandra Palace and play on one of the best stages in the sport.

Yan remains one of eight players suspended indefinitely, until the investigation into match-fixing comes to an end.

The week before Yan was suspended, Lu Ning, Li Hang, Zhao Jianbo, Bai Langning and Chang Bingyu were all banned from competing or attending events, with Liang Wenbo hit with a ban in October.

Since then Chen Zifan has become the eighth player to be suspended as the investigation, and scandal, rumbles on.

The Farmer replaces The Tiger.