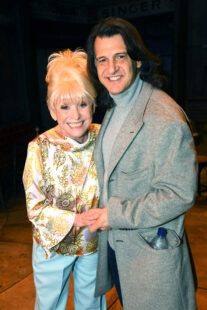 Dame Barbara Windsor’s widower Scott Mitchell has opened up on how he dealt with judgement over the pair’s age 26-year gap by drinking and taking drugs.

Scott, 59, who has now been clean for 21 years, explained that when he and Dame Barabara first got together, he felt an ‘outside force judging’ them for their age gap.

‘We were married for 20 [years] against all odds. Let’s be honest, on paper, when we first met, everyone laughed and said it wouldn’t last so we dealt with all that stuff at the beginning,’ Scott recalled on Loose Women.

Asked if that was hard to deal with, he added: ‘Yeah, it was hard. I didn’t handle it particularly well in the sense at the time that I used to drink quite heavily and my way of dealing with stuff was to drink and take drugs and numb it all out.

‘We just wanted to be together but there was this outside force judging us, mainly because of the 26-year age gap.’

Scott went on to say: ‘The great thing was…we didn’t kid ourselves about how we were viewed by people.’

EastEnders icon Dame Barbara, who played Peggy Mitchell, died in December 2020. She was 83 and had Alzheimer’s disease.

In a statement at the time, Scott said: ‘Her passing was from Alzheimer’s/dementia and Barbara eventually died peacefully and I spent the last seven days by her side.

‘Myself, her family and friends will remember Barbara with love, a smile and affection for the many years of her love, fun, friendship and brightness she brought to all our lives and the entertainment she gave to so many thousands of others during her career.

‘Barbara’s final weeks were typical of how she lived her life. Full of humour, drama and a fighting spirit until the end.’

‘I don’t look at comments but for some reason, one was above the line and someone had said, “I see the long game paid off”’, he told The Sun.

‘After 27 years and everything we went through together, it was shocking that someone could actually think like that. But it showed me that whatever you do, there’s always going to be someone critical.’

Scott went on to talk about the comparisons between Dame Barbara’s death and Peggy Mitchell’s, the character she played on and off until 2016.

He added: ‘A little part of them will always be in there and I truly believe that the strong, stubborn, survivor Barbara realised what was happening. She knew she wasn’t coming home, and she took a look around her and thought, “this is not for me”’.


MORE : Barbara Windsor’s widower reveals she had debts of £1,000,000 as he shuts down ‘gold digger’ accusations


MORE : Dame Barbara Windsor’s widower shares details of their open relationship: ‘We both had a similar attitude towards sex’

‘I didn’t handle it particularly well’.