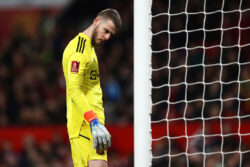 De Gea had a moment to forget despite the 3-1 win (Picture: Getty)

United sealed their place in the fourth round of the FA Cup with a 3-1 win over The Toffees on Friday night.

Erik ten Hag’s side took the lead after just four minutes but were pegged back 10 minutes later by Conor Coady, who pounced when Neal Maupay’s harmless cross rolled through de Gea’s legs, with United goalkeeper seemingly thinking it was going to strike the outside of the post.

United reclaimed their lead when Coady put past his own goalkeeper early in the second-half with Marcus Rashford wrapping up the win from the penalty spot in added time.

Dalot, starting his first game since returning from injury, was seen discussing the incident with De Gea at half time, also taking the blame for the calamitous error.

‘I could have reacted a little bit quicker,’ Dalot told beIN Sports.

Dalot said he was also to blame (Picture: Getty)

‘Credit also to the Everton player [Coady] who reacted quicker than me.

‘I think it’s just things for us to learn, luckily we won with merit and we fight to score one more goal and I think we deserved to go through.’

Former United captain Roy Keane was not so forgiving, however. The former Republic of Ireland international was left bewildered by the incident, comparing it to something out of a Carry On comedy movie.

‘It’s a shocking mistake,’ Keane told ITV at half-time. ‘It’s like Carry On football. Looks as if he’s had a few drinks.

‘Shocking mistake. It’s almost as if the goalkeeper has been sent off and an outfield player has gone in goal. He just doesn’t know what to do. Horrendous mistake.’

‘David de Gea has had an absolute nightmare there. I’m not sure where he thinks the ball is going. What is he doing there? He’s trying to let it go out for a goal kick. No idea… I cannot believe what I’ve just seen.

‘He’s probably the best goalkeeper in the world at making saves with his feet but on that occasion, just put your gloves on it!’

De Gea was left red-faced after the incident.