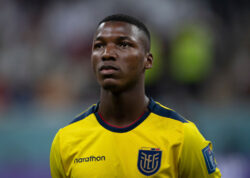 Brighton chief executive Paul Barber has issued a warning to Chelsea and Liverpool over their pursuit of Moises Caicedo.

Caicedo has quickly established himself as one of Brighton’s most important players, having made a move from Ecuadorian side Independiente del Valle in 2021.

The 21-year-old’s form for club and country has attracted interest from Premier League giants Chelsea and Liverpool, with both teams keen to sign a new midfielder in January.

Chelsea are preparing for the departure of Euro 2020 winner Jorginho and have also been linked with a move for Qatar World Cup winner Enzo Fernandez.

Liverpool, meanwhile, are expected to make a new midfielder their next marquee signing, having also expressed interest in England and Borussia Dortmund star Jude Bellingham.

Brighton chief Barber says the club have not received any offers for Caicedo and has joked that Liverpool ‘don’t have his email address’.

Barber also suggested that Brighton would only sell Caicedo for a huge fee, agreeing with Graham Potter’s claim that £42m would not even be enough to buy the player’s boots.

Paul Barber says Brighton have not received any offers for Caicedo (Picture: Getty)

Asked about possible offers for Caicedo, Barber told CBS Sports: ‘I’m pleased to say we haven’t had any. Maybe Liverpool haven’t got my email because I haven’t seen any.

‘I’m not sure £42m will even include the boots now, maybe just the laces. But joking aside, every player’s value is ultimately determined by the market.

‘Graham’s comments were part in jest but part serious because Moises has been an exceptional player for us.

‘Since he came to the Premier League, he has developed all the time. He’s a young man with a great attitude, fantastic work ethic and a very nice human being off the pitch.

‘So all those things contribute to the value of a footballer should it come to that moment to sell.’

Caicedo’s form has helped Brighton climb into the top-half of the Premier League this season. The Seagulls thrashed Middlesbrough 5-1 in the FA Cup on Saturday and face Liverpool next weekend.