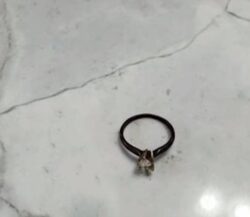 A plumber found the couple’s engagement ring while replacing a toilet (Picture: WFLA)

A couple’s engagement ring was found stuck in a toilet two decades after they said ‘I do’.

Nick Day proposed to his wife Shaina 21 years ago but she soon could not find the token of his love.

‘She came to me one day and said, “I think I lost my ring,”‘ Nick told WFLA. ‘She said, “It was on the counter now it’s gone and I think I may have flushed it down the toilet on accident.”‘

The couple at the time looked for the diamond ring but could not locate it in their home in Lakeland, Florida.

Nick Day (left) and Shaina Day (right) got their engagement ring back more than two decades after she lost it (Picture: WFLA)

‘I climbed down into the septic tank so we could pump every bit of it through a strainer to try to find it,’ Shaina, 43, told the TV station. ‘No luck.’

In November, Nick’s mother Renee had a local plumber replace her toilet. In the process, the plumber found a valuable object inside.

After cleaning the ring, Nick’s parents wrapped it and gifted it to the couple on Christmas night.

Shaina was in tears.

‘It was kind of an ugly cry,’ Shaina said. ‘I sat there and I was like, “Oh my gosh, this is my ring. This is my ring.” I’m wiping my eyes and mascara is going everywhere.’

Nick said that they both ‘knew exactly what it was’ when his parents brought it wrapped in a small Christmas bag.

The diamond lasted, but the band had turned black. The couple said they may incorporate the diamond to a new jewelry piece. They are also thinking about giving it to a future generation.

The couple said they may incorporate the diamond from their engagement ring into a new piece of jewelry (Picture: WFLA)

But they agreed on one thing.

‘Check your toilets when you lose things,’ Nick said.

The couple reunited with their ring about a month after a college softball team helped a man find his engagement ring for his girlfriend in tornado debris.

The diamond ring was discovered when the family replaced the toilet two decades later.