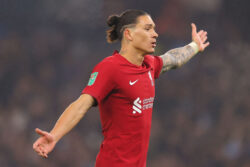 Over the summer, Nunez moved to Anfield from Benfica in a deal that could rise to a club-record £85million, but so far he has struggled to live up to that price tag.

While nine goals and four assists in 20 appearances is not a bad return, the striker has been criticised for missing big chances, particularly in the recent defeat to Manchester City in the Carabao Cup.

It may be early days but some have been quick to label the 23-year-old a flop, but Klopp insists that there is plenty more to come from the Uruguay international, directly comparing him to the legendary Lewandowski.

12 years on, Lewandowksi is widely-considered to be one of the greatest strikers of all-time having scored 636 goals for club and country, behind only Lionel Messi and Cristiano Ronaldo in the modern-era.

‘There are a lot of similarities to be honest. I think Lewi would tell the same story,’ Klopp said in his pre-match press conference on Thursday.

‘We had shooting sessions where he didn’t finish off one. We had bets all the time for €10 where I said, “If you score more than 10 times I will pay you €10 and if you don’t you have to pay me”. My pocket was full of money.

‘Going back to that time, when I started playing Lewandowski the journalists asked me why Lucas Barrios was not playing. Barrios had scored 16 goals that season and was the No. 9 in our team.

‘So Lewi started playing in different positions to adapt to different things. The Polish journalists were not too friendly with me because he didn’t play No 9.

A massive chance for Liverpool to get level again but Darwin NÃºÃ±ez can only drag his shot wide of the post! ð© pic.twitter.com/dkeAtIj9pD

Klopp is sure of Nunez’s potential but he’ll have to reach it quickly if Liverpool are to get their season back on track, with the club sixth in the table ahead of their clash against Leicester on Friday night.

‘It’s all about staying calm. When you see the potential, stay calm,’ the Reds manager added.

‘It is so difficult in the world we are living in. I don’t mean this personally but because of you [the media] asking and making a big fuss of everything, then the supporters, social media and all these kinds of things.

‘The more you can shut off that, the better it is. I think we all agree that the potential is so obvious. Is everything right?

‘But it is all coming. I had this situation with Lewi but it is not only Lewi. He is the obvious comparison. The team is completely convinced and that’s really cool.’


MORE : Why did Pele never play for a European club?

‘He is the obvious comparison.’