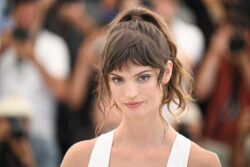 The late actress starred opposite Woody Harrelson in the film Triangle of Sadness (Picture: Stephane Cardinale/Corbis via Getty Images)

Charlbi Dean’s cause of death has been confirmed following her ‘sudden’ death at the age of 32.

In August this year, it was announced that the South African model-turned-actress, who appeared in the superhero TV show Black Lightning and in the movie Triangle of Sadness with Woody Harrelson had died.

Representatives for her family told TMZ at the time that she had died following an ‘unexpected sudden illness’.

The New York City Office of Chief Medical Examiner has since revealed that the star died of bacterial sepsis.

In a statement sent to People, a spokesperson for the office explained that the sepsis ‘was a complication from asplenia (the absence of a spleen due to remote blunt trauma to her torso’, with her death ruled an accident.

The bacterial sepsis that caused Dean’s death is said to have developed after she was infected with a bacteria called Capnocytophaga, which the US Centers for Disease Control and Prevention outlines can often be found in the mouths of dogs and cats, but can spread to humans on rare occasions.

She had her spleen removed over a decade ago after an accident (Picture: Alberto E. Rodriguez/Getty Images)

The CDC states: ‘Rarely, Capnocytophaga germs can spread to people through bites, scratches, or close contact from a dog or cat and may cause illness, including sepsis. Most people who have contact with a dog or cat do not become sick.

‘People with a weakened immune systems who have difficulty fighting off infections (for example, people with cancer or those taking certain medications such as steroids) are at greater risk of becoming ill.’

People added that it’s unclear how Dean developed her bacterial sepsis after being infected with Capnocytophaga, and an animal was involved.

Following the actress’ death, her brother Alex Jacobs spoke to Rolling Stone in August, explaining how after she was involved in a ‘very, very bad car accident’ in 2009, her spleen was removed.

‘They removed her spleen. It’s involved in fighting off infections, and that could have had something to do what happened. Her spleen not being there just added on to the reason why she perhaps couldn’t fight it off,’ he said of his sister’s infection.

He recalled how Dean had asked her fiancé Luke Volker to take her to the emergency room after suffering ‘minor’ symptoms.

‘This happened literally within the span of a day: getting a headache, going to sleep, waking up her boyfriend and saying please take me to the hospital,’ he said.

‘We still aren’t entirely sure [what happened]. There’s an autopsy being done which we know might take quite a while. But what we have heard it that there was a viral infection in her lungs.’

The late actress starred opposite Woody Harrelson in the film Triangle of Sadness.