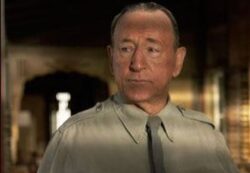 Tony Barry has died at the age of 81, it has been confirmed.

The actor is known for his roles in the likes of festive film Home By Christmas, as well as appearing alongside Nicole Kidman and Hugh Jackman in 2008 flick Australia.

Barry also appeared in well over 100 projects in his lifetime, including popular Australian hospital show All Saints.

His death was announced on Thursday morning by the official Media, Entertainment and Arts Alliance (MEAA) who shared the news on Facebook.

Paying tribute to the star, the organisation wrote in a statement: ‘Vale Australian veteran actor Tony Barry who passed away yesterday aged 81.

‘Tony performed in nearly 60 feature films and over 45 television series and despite the difficulties caused by his illness, Tony worked up until shortly before his death. He was an Equity member for over 50 years.’

Barry appeared in well over 100 projects throughout his career, including Australia, where he starred alongside some massive names (Picture: 20th Century)

The statement continued: ‘In addition to his acting career, Tony was also known for his many years of volunteer work including Indigenous rights, working as part of rehabilitation programs in the justice system and a range of environmental activism.’

Tributes poured in for the actor from fans, with one praising his roles as ‘always very authentic and believable.’

‘That’s terribly sad news,’ another said. ‘Tony was a very kind and generous hearted man and a wonderful actor. Condolences to his family.’

One woman shared her own memories of Barry, recalling: ‘I had the privilege of meeting him a little earlier this year. He was so much fun and a real character. He will be sorely missed.’

‘I had the privilege of working with Tony on “The Silence”,’ another commenter shared. ‘Simply put, the most supportive person I’ve ever met in 18 years in the industry. Rest in Peace mate.’

Born in 1941, Barry made his first screen appearance in 1968 with the popular series Skippy: The Bush Kangaroo.

Thousands of homes could be without water on Christmas Day

His first film credit came in 1977’s The Mango Tree, and in 1981 rose to prominence through New Zealand movie Goodbye Pork Pie.

Barry had battled melanoma, a type of skin cancer, and in 2013 lost his leg to the disease; he kept working throughout his illness, with the amputation even written into the series he was working on.

Fans have paid tribute to the popular actor.