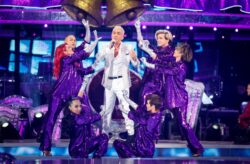 Bruno Tonioli made a ‘understated and subtle return’ to the Strictly Come Dancing ballroom, in the words of Claudia Winkleman.

The ex-Strictly judge gave a surprise performance for the Christmas special, which saw the likes of Larry Lamb and Nicola Roberts hit the dance floor.

But Bruno wasn’t back to dance, in fact, he surprised with a singing performance, leaving the judges Shirley Ballas, Motsi Mabuse, Craig Revel Horwood and Anton Du Beke, on their feet.

A breathless Bruno said after his performance: ‘The show is fantastic, the judges, guys you did a fantastic job.

‘Anton, you’re brilliant. You made it your own, it is fabulous what you do.

‘And I missed you girls!’ he added to hosts Tess Daley and Claudia.

The judges were left on their feet (Picture: BBC)

The Dancing with the Stars judge continued: ‘And the audience, you are the best in the world.’

When Tess commented on it being a ‘treat’ to have Bruno back, he replied: ‘It’s your gift to me. This was a privilege and an honour.’

The 66-year-old revealed earlier this year he had quit the BBC’s juggernaut series after 18 years to concentrate on the American spin-off, Dancing With The Stars.

Anton took his place after stepping in during the pandemic, while Bruno judged the latest season of DWTS, which ended this week and was won by TikTok star Charli D’Amelio and Mark Ballas, with long-running colleague, Len Goodman.

While it may have been a surprise, this wasn’t the first time Bruno has belted out a tune on Strictly, having performed a number on the show in 2019.

Taking to the stage in a white tux, Bruno was surrounded by bright pink feathers as he belted out Can’t Take My Eyes Off You during the opening episode.

As well as DWTS, Bruno has been seen on our screens this year in The Masked Dancer UK, when he was unveiled as Pearly King.

On signing up to the show thinking it was actually The Masked Singer, he joked: ‘I said, “Singer, oh yeah I’ll do it. Dancer?? You’ve got to be kidding me!” You should always read your contract.’

He added of his character: ‘It had such swagger, it’s good doing something so out of your comfort zone.’

Strictly Come Dancing is available to watch on BBC iPlayer.