Brexit Briefing – The Home of all that is Brexit 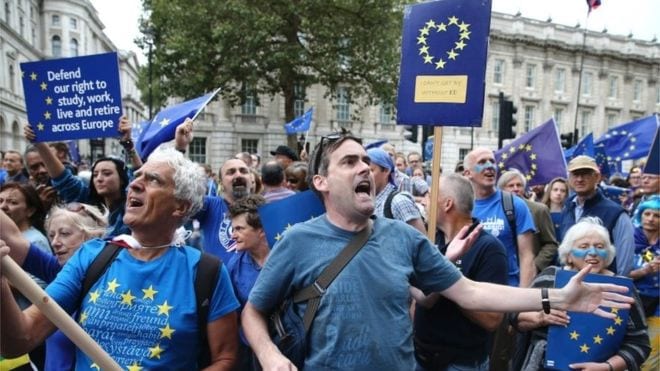 Latest Headlines from all that is Brexit

Updates & articles from around the globe

Businesses and industry worldwide had targeted this date as the one where all their agreements should have been made. Instead, they have been sent to into a spiral of uncertainty where no-one knows what is going to happen

The Commons is debating a motion on the withdrawal agreement, covering terms of the UK’s exit

PM Theresa May has managed to gain some more support for her Brexit proposal, but we aren’t any clearer as to what will happen.

Her pledge has brought some MP’s on-side, such as ex-foreign secretary Boris Johnson.

Boris Johnson has demonstrated that his loyalty is to the top job, not the deal itself. His support for the PM’s proposal is solely resting on the fact that she will resign, allowing him to mount a challenge for the leadership of the conservative party.

But challenges remain for the PM after Northern Ireland’s DUP, who she relies on for support, said it would not back the deal because of the Irish backstop.

Meanwhile, none of eight alternative Brexit proposals brought by MPs secured backing in a series of Commons votes.

Tonight’s indicative votes has strengthened the government’s view that the PM’s deal is the best option.

After the option for the second referendum did not get enough support any deal must include a withdrawal agreement.

Theresa May has promised Tory MPs she will quit if they back her Brexit deal.

She told backbench Tories: “I am prepared to leave this job earlier than I intended in order to do what is right for our country and our party.”

Boris Johnson has revealed he will back the prime ministers deal in order to get her out of no 10.

The List of eight amendments that will be put to a vote.

Revocation to avoid no deal – If the government has not passed its withdrawal agreement, it would have to stage a vote on a no-deal

MPs have voted to take control of today’s parliamentary business. A series of indicative votes to show their preferred options for Brexit will follow this evening. The Speaker, John Bercow has selected eight options. The measures being debated include leaving without a deal, forming a customs union, Norway style or customs 2.0 and a confirmatory referendum.

Theresa May is still trying to drum up support for her deal, despite it being voted down by a large margin twice.

The Speaker of the House reiterated his earlier warnings that the PM’s deal could not come back for a vote if it had not significantly changed.

Labour has confirmed it will be backing a motion calling for a confirmatory public vote, saying any deal agreed by Parliament “needs further democratic approval”.

Govt source: only realistic way to circumvent John Bercow’s ruling on meaningful vote is to incorporate it into Withdrawal Bill (the one implementing Brexit deal). So second reading of that bill would effectively be the meaningful vote

At 2.00pm parliament will vote to take control over the Brexit process…

If the PM loses she will have to go back to the EU with the new set of conditions. How will the EU respond?

Donald Tusk has said the EU must not betray the 6 million people who signed the petition or the 1 million who marched in London on Saturday.

Nigel Farage has asked the EU to just kick us out on 12th of May, irrespective of what happens to the UK afterwards.

Labour MP Stephen Kinnock says he’ll be voting for a Norway-style arrangement with the EU.

“I’ve been completely consistent for the last two and a half years. I’ve been campaigning for the Norway option.

Anti-Brexit British voters who want to remain in the EU must not be “betrayed”, the president of the European Council has warned.

I’m a great believer in petitions so when asked to sign the online one calling on Theresa May’s government to revoke the Article 50 notice and …..

British MP’s have seized control of the parliamentary timetable for a series of “indicative votes” on the next steps for Brexit – but Theresa May has not committed to abide by the outcome. The House of Commons passed by a comfortable 329 ayes to 302 noes an amendment led by the Conservative former minister Sir Oliver Letwin which provides for a series of indicative votes on finding a consensus Brexit solution. The PM lost three ministers who resigned.

“Where this government has failed, this house must, and I believe will, succeed.” – Jeremy Corbyn

At least 16 Brexit proposals have been submitted by MP’s for “indicative votes” in the Commons today. The Speaker, John Bercow, will select the options to be debated.

Against the backdrop of MPs grabbing control over the Brexit process, the British prime minister has reportedly resorted to some extreme measures

In a bid to break the Brexit deadlock, lawmakers in the UK Parliament have handed Theresa May another defeat.

MPs have decided to try to break the Brexit deadlock by holding a series of “indicative votes”. But what does it mean?

it is often said that the Brexit choice is between a deal and no deal. However, the current situation is

The Brexit process is a complete shambles

The weekend saw the 2 biggest protest rally in UK history, second only to the Iraq war

She won’t allow a second referendum

The government has become the laughing-stock of Europe.

What week it has been, The Prime Minister has spent the weekend in Chequers, trying to make a deal even bargaining with her future.

It Is understood that Boris Johnson was at this meeting and he wanted assurances that the Prime Minister would resign before choosing a side.

Here are a few of the best articles from today, to catch up on what you may have missed. We’ve also added a few articles from European media to give you an idea of what the EU think of our shambolic Brexit.

“The face of Britain is disfigured by Brexit. My German friends used to say they thought we were ordered and now they realize we’re just as chaotic as they are.”

Oh and BTW way we have handpicked the articles … we don’t trust auto feeds and RSS content when it is this important.

Hover over the pictures and you will see the name of the publisher as well a snippet of the article.

European Union leaders on Friday gave Britain one final opportunity to avoid a no-deal Brexit. How did the British newspapers react to this postponement? Frustration was the one unifying theme.

The two-week reprieve granted by the EU means that as things stand, this becomes the new legal date for the UK’s departure from the bloc under EU law.

Theresa May says she is still trying to build support for her Brexit deal, which has twice failed in Parliament. Britain could leave the EU without a Brexit deal on April 12

Prime Minister Theresa May is expected to update ministers on her Brexit strategy when she chairs a meeting of her cabinet this morning. However, some sources have suggested she will outline her plans for the future as she struggles to get her Brexit deal passed.

Prime Minister Theresa May is expected to update ministers on her Brexit strategy when she chairs a meeting of her cabinet this morning.