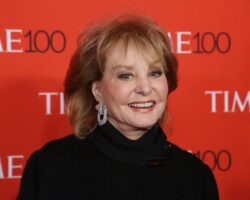 Barbara Walters, one of the top broadcasters in the US since the 1970s, died at her New York home in Friday (Picture: Taylor Hill Provider/Getty)

Veteran broadcaster Barbara Walters has died at the age of 93.

The US TV icon, a broadcasting pioneer who throughout her decades-long career interviewed the likes of Michael Jackson, Oprah Winfrey and Katharine Hepburn as well as presidents Richard Nixon and Donald Trump, died on Friday at her home in New York.

She was the first US female network news anchor in 1976 on ABC, paving the way for female journalists for years to come.

Walters’ representative Cindi Berger said in a statement: ‘Barbara Walters passed away peacefully in her home surrounded by loved ones. She lived a big life.

‘She lived her life with no regrets. She was a trailblazer not only for female journalists, but for all women.’

Walt Disney CEO Bob Iger was one of the first to announce the ‘one-of-a-kind reporter’, who was responsible for co-creating US talk show The View, had died.

He tweeted: ‘I have sad news to share today. Barbara Walters passed away this evening at her home in New York.’

The businessman hailed his old friend as a ‘true legend’ and a “pioneer” in an accompanying statement.

Walters, an icon in her field, was the first US female network news anchor in 1976 on ABC (Picture: Abc News-Tv/Kobal/Shutterstock)

Walters was responsible for creating The View, and made her final appearance on the show in 2014 upon her retirement (Picture: Ida Mae Astute Provider/Walt Disney Television via Getty Source)

He wrote: ‘Barbara was a true legend, a pioneer not just for women in journalism but for journalism itself.

‘She was a one-of-a-kind reporter who landed many of the most important interviews of our time, from heads of state and leaders of regimes to the biggest celebrities and sports icons.

‘I had the pleasure of calling Barbara a colleague for more than three decades, but more importantly, I was able to call her a dear friend.

‘She will be missed by all of us at The Walt Disney Company, and we send our deepest condolences to her daughter, Jacqueline.’

Walters was born in Boston on 25 September, 1929, and grew up in New York regularly surrounded by the famous friends of her father, Broadway producer and nightclub owner Lou Walters.

After graduating from Sarah Lawrence College with a degree in English, Walters had a brief stint as a writer for CBS News before launching her TV news career at NBC’s Today show, where she landed a job as a writer and researcher in 1961.

Her career spanned several decades and she has long been hailed as a pioneer in her field (Picture: Walt Disney Television, Getty Images)

She gradually moved up the ranks, giving weather reports and covering features before becoming reporter-at-large and, ultimately, the programme’s first female co-host alongside Hugh Downs and Frank McGee.

She left NBC to become co-anchor on ABC Evening News in 1976 and three years later, joined the network’s feature programme 20/20, on which she stayed as host until 2004, interviewing the likes of Michael Jackson, Richard Nixon, Vladimir Putin and Monica Lewinsky during her time there.

In addition, she also served as moderator during a number of presidential debates.

In 1997, Walters – who scooped three Emmy Awards, a star on the Hollywood Walk of Fame and various Lifetime Achievement accolades over the years – founded her daytime talk show The View and made frequent appearances as co-host until retiring from the programme in 2014.

Across her storied career, she interviewed Fidel Castro in the mountains of Cuba, and she broke TV ratings records with her bombshell interview with Lewinsky about her Bill Clinton affair in 1999.

She also famously interviewed every US president since Nixon, and one of her most recent memorable moments came just over 10 years ago when she flat-out told the Kardashians they had ‘no talent’.

Tributes have been paid for Walters following her death, with many remembering her unmatched efforts in news, as well as her generous spirit.

Hugh Jackman tweeted on behalf of himself and his wife Deborra-Lee Furness: ‘Deb & I are so sad that Barbara Walters passed away. She was a trail blazer, wickedly funny, generous, open hearted and a good friend.

‘She also gave some of the most memorable dinner parties we’ve ever been to. Get ready heaven, Barbara’s coming to spice things up.’

Lewinsky recalled one of her first meetings with Walters in the midst of the Clinton affair scandal, regaling her followers that the newscaster had joked she should ‘shoplift’ instead of becoming embroiled with the president.

She wrote: ‘I knew barbara for over half of my life. we met in the spring of 1998, in the midst of the starr investigation; i was 24. i remarked that this was the first time i’d ever been in serious trouble. i’d basically been a good kid, got good grades, didn’t do drugs, never shoplifted etc. without missing a beat barbara said: monica, next time shoplift.’

She added: ‘We stayed in touch over the past 25 years. the last time we saw each other was for lunch a few years ago. of course, she was charming, witty and some of her questions were still her signature interview style: “so tell me, monica, how do you feel …etc etc.”

‘She was the very first person with whom i ever sat for a television interview… and will certainly be my most memorable. barbara will be missed by many — including me. sending love to jackie, george + her other friends. #RIPBarbara.’

US broadcaster and journalist Dan Rather tweeted: ‘The world of journalism has lost a pillar of professionalism, courage, and integrity. Barbara Walters was a trailblazer and a true pro. She outworked, out-thought, and out-hustled her competitors. She left the world the better for it. She will be deeply missed. RIP.’

Deb & I are so sad that Barbara Walters passed away. She was a trail blazer, wickedly funny, generous, open hearted and a good friend. She also gave some
of the most memorable dinner parties weâve ever been to. Get ready heaven, Barbaraâs coming to spice things up. @Deborra_lee pic.twitter.com/pQfLSG5m7a

a short thread on barbara waltersâ passing:
i knew barbara for over half of my life. we met in the spring of 1998, in the midst of the starr investigation; i was 24. i remarked that this was the first time iâd ever been in serious trouble. iâd basically been a good kid â
(1/4)

The world of journalism has lost a pillar of professionalism, courage, and integrity. Barbara Walters was a trailblazer and a true pro. She outworked, out-thought, and out-hustled her competitors. She left the world the better for it. She will be deeply missed.Â RIP

Thank you for sharing your light with the world, you will be missed dearly #BarbaraWalters pic.twitter.com/1hJS4KlXkG

Thank you Barbara Walters for giving a shy girl who didnât like to debate a seven-year chance of a lifetime. Thank You for allowing me to find my voice and encouraging me to fly. My heart hurts, but Iâll always love you Lady! â¤ï¸ #BarbaraWalters pic.twitter.com/lzvtRnJiR4

A true trailblazer and icon ! She lived a full life and leaves behind such a powerful legacy. Rest in peace, Barbara Walters. pic.twitter.com/nn6c5JWd6h

Walters was married four times to three different men. She went Robert Henry Ratz in June 1956 but their union was annulled 11 months later. She went on to tie the knot with theatre producer Lee Guber in 1963 and divorced in 1976, eight years after adopting their baby daughter Jacqueline.

Walters married Lorimar Television CEO Merv Adelson in 1981 and they divorced in 1984, only to reconcile and exchange vows again in 1986. She never married again after their second divorce in 1992.

In her 2008 autobiography, Audition, BWalters revealed she had had an affair with US Senator Edward Brooke in the 1970s and dated Federal Reserve Chairman Alan Greenspan around the same time.