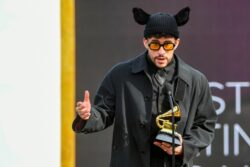 Bad Bunny has spoken out after taking a fan’s phone and throwing it across the street (Picture: Getty Images for The Recording Academy)

Bad Bunny has defended himself for throwing a woman’s phone in the water after she tried to take a selfie with him.

The musician, 28, was seen in a viral clip taking a fan’s phone after she ran up to him for a photo during a trip to the Dominican Republic.

In the clip, posted to Twitter, the rapper – real name Benito Antonio Martínez Ocasio – is walking along the street with what appears to be both friends and fans following him, when a woman sidles in next to him and takes a selfie of them together.

He then grabs the phone from her hand and throws it far across the street and into the water, with the girl looking shocked.

The video had gone viral on social media, with some clips on Twitter seemingly having been viewed millions of times.

Now Ocasio has spoken out about the incident, saying it was about ‘respect.’

Ocasio says it is about ‘respect’ (Picture: Getty Images)

Taking to Twitter, Ocasio – writing in Spanish – said: ‘The person who comes up to me to say hello, to tell me something, or just to meet me, will always receive my attention and respect.

‘Those who come to put a phone in my face, I will consider it for what it is, a lack of respect, and I will treat it like one.’

Users were divided by the incident, with some disgusted and others arguing he was in the right after having his personal space invaded.

The Grammy Award-winning artist was recently named Spotify’s most-streamed artist in the world for the third year in a row, and last year led the American Music Awards with a whopping eight nominations.

However last month he announced he would be taking a break from his music career to take the time to ‘enjoy my achievements.’

The musician is also making a name for himself in the acting world having recently appeared alongside Brad Pitt in Bullet |Train (Picture: AP)

He said in a statement: ‘I’m taking a break. 2023 is for me, for my physical health, my emotional health to breathe, and enjoy my achievements.

‘We’re going to celebrate. Let’s go here, let’s go there, let’s go on the boat. I have a couple of sporadic commitments, and I’ll go to the studio, but there’s no pressure. Remember yourself, cabrón. You’ve worked your ass off.’

As well as music, Ocasio is no stranger to the world of professional wrestling, having first appeared at the 2021 Royal Rumble, where he performed his song Booker T alongside the track’s WWE Hall of Famer namesake.

He then showed off his skills inside the ring, teaming up with Damian Priest to beat Johnn Morrison and The Miz in a tag team match at Wrestlemania.

Ocasio has also dabbled in acting, having made an appearance in 2022’s Bullet Train alongside Brad Pitt, Sandra Bulock and Aaron Taylor-Johnson.

The shocking moment was caught on video.