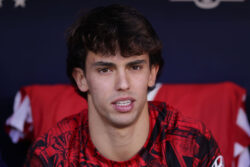 Arsenal and Manchester United have the chance to seal an amazing bargain transfer for Atletico Madrid star Joao Felix, according to reports.

Felix is almost certain to leave Atletico in January, with his relationship with manager Diego Simeone at breaking point, but the club also need to get him off their books to stay within Financial Fair Play regulations.

The forward has been heavily linked with a move to the Premier League, with Arsenal and United especially interested, while Chelsea are also said to be in the running.

The Gunners and the Red Devils are in desperate need of new firepower because of Gabriel Jesus’ lengthy knee injury and the departure of Cristiano Ronaldo respectively.

There is however one huge obstacle preventing an easy transfer from happening: Felix’s price tag, with Atletico looking to recoup as much of the €126million (£108m) they paid Benfica for him in 2019 as possible.

Neither club are likely to splash that much cash on a single player, or at least not in the upcoming transfer window, and it seems that the La Liga side have realised they must lower their offer significantly in order to shift the Portugal international.

The Daily Record report that Atletico will allow Felix to leave on loan for a fee of just £8million as long as the buying club covers his entire wage til the end of the season.

The 23-year-old reportedly earns just under £250,000-a-week and there will be no contractual obligation to buy the player in the proposed deal.

If these terms are indeed true, then clubs will surely jump at the chance to sign Felix, who is still a very talented forward despite his struggles in Spain.

Since moving to Madrid, he has 51 goal involvements in 129 games, with Simeone’s defensive tactics restricting his ability to create and score more.

At the 2022 World Cup, he starred for Portugal, with one goal and two assists from four games, playing alongside Ronaldo and United stars Bruno Fernandes and Diogo Dalot.


MORE : Mikael Silvestre tells Donny van de Beek he has ‘five to six months’ to save his Manchester United career

What a bargain this is.