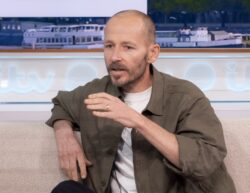 Jonnie Irwin believes his young sons won’t remember him after his death, as he reflected on his terminal cancer diagnosis.

Opening up in an interview ahead of what may be his last Christmas, the A Place In The Sun presenter, 49, also shared his hopes for wife Jess to ‘be happy’, even if it’s with someone else.

Jonnie, who shares sons, Rex, three, and two-year-old twins Rafa and Cormac with his wife, revealed earlier this winter that he had been given ‘months’ to live after learning he had cancer in 2020, with the disease spreading from his lungs to his brain, then his liver.

While the father-of-three had initially decided to keep the diagnosis private, he later had a change of heart, saying wanted to ‘get the monkey off my back’ and speak openly about it.

Speaking alongside Jess this weekend, he said: ‘I want Jess to be happy when I’m not here. I don’t want her to be on her own. My most selfless decision is to wish her well for the rest of her life. If that is with someone else, then so be it. If she finds a good bloke to look after her and the boys, that would be great.’

Jess replied, before starting to cry, in the interview with The Daily Mail: ‘You don’t need to say that. That’s the most upsetting part — you not being around.’

Jonnie went on to add: ‘I don’t think the boys will remember me after I’ve gone,’ before his wife insists their eldest Rex will.

The host replied: ‘The twins won’t — which is just as well because I spend most of my life telling them off.’

Elsewhere in the chat Jonnie said they’re ‘hurtling towards where we don’t want to be’ and noted even doctors were surprised by the ‘violence’ in which his cancer returned, but said he and Jess are trying to make the most of every day.

After revealing his diagnosis, the TV star thanked fans for their support, saying that he was ‘overwhelmed by [the] kind messages.’

He wrote: ‘Overwhelmed by your kind messages, not had the chance to read them all yet but I assure you I will.

‘Yesterday I needed some headspace so I escaped to the country with my brother in law and his dog. It was a tonic. Xx’.’

If you or someone you care about has been diagnosed with cancer, Macmillan can offer support and information.