Android users received an earthquake warning seconds before it hit 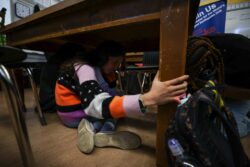 Smartphones could be the next earthquake warning systems as demonstrated in California this week.

On Tuesday, some Android users were alerted of an impending earthquake, a few seconds before the it actually hit.

Thanks to an app developed by researchers at the University of California, Berkeley, people can now receive a brief earthquake warning just before it’s felt.

The app called MyShake, works on both iPhone and Android, but Google announced in 2020 that it would implement Berkeley’s technology directly into Android.

Just got at earthquake alert from Google seconds before I felt it ð¤¯ð³ technology is WILD.

Android-users took to Twitter to announce they had been alerted, calling it the technology ‘impressive’.

The app works by collecting data from its motion sensors, when your phone is stationary. MyShake then uses a neural network to decide which motion is produced by earthquakes and which isn’t.

I got a notification on my Apple Watch about an earthquake, and *then* my house started shaking.

When MyShake detects an earthquake, its network of phones records the shaking to collect valuable data.

‘The alert came just before, felt like a long one, hope everyone is ok,’ tweeted Google’s CEO Sundar Pichai, attaching a screenshot of the alert, seemingly taken on his Pixel phone.

The alert came just before, felt like a long one, hope everyone is ok pic.twitter.com/mUzLFkkWxz

The technology is still in its early stages but experts hope that one day people can be alerted of earthquakes well in advance, giving them enough time to duck and cover.

Yesterday’s earthquake was a moderate one at 5.1 magnitude, striking near the Seven Trees, California region.


MORE : How to stop WhatsApp photos saving on Android and iPhone

In 2020, Google said it would implement the technology directly into Android.