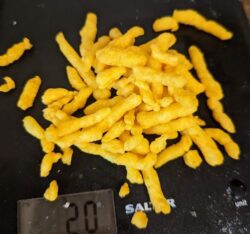 Crisp lovers around the world look away now because the amount of NikNak’s in this packet of crisps is absolutely shocking.

A woman from Hull was looking forward to munching on the crunchy snack when she emptied the packet, only to find 21 crisps inside.

What’s even worse is the fact all the remaining crisps had broken up into small crumbs at the bottom of the packet.

The unnamed 27-year-old bought the multi-pack packet of crisps from a Morrisons store in the city.

She revealed: ‘When I opened up the packet, I just could not believe how little was in there! I thought something must have been wrong, but then I opened the next packet and the next – They were all the same.

‘I understand the cost of living crisis is having an impact on food, but this amount is absolutely appalling. You don’t want to use your money on something that is half empty.’

The woman vented: ‘I couldn’t actually believe so I counted them. There were only 21 in the packet and the rest were like dust. I’d have expected at least 50 for it to be considered a full packet.’

Although the crisp packet weighed the same as advertised in the shop, the woman says she feels ‘cheated’ over the measly amount.

On the other end of the scale are massive crisps.

Desperate migrant mothers ‘throwing their babies into Channel to be rescued’

One Dorset man in March 2022 found a ‘mutant crisp’ which he auctioned off to charity it was so impressive.

Michael Landford thought he was dreaming when he pulled out the six-inch snack from a cheese and onion bag of Snackrite.

He described how it just kept ‘going and going’ and the size of it just made him want to eat it all up.