Woman confronts her stalker in the street shouting ‘leave me alone’ 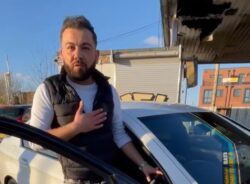 Yousif Mohammed was confronted by his victim who posted pictures of him online (Picture: Cavendish Press)

This is the moment a woman confronts her own stalker in the street after he drove her to the brink of suicide.

Yousif Mohammed, 32, followed Izabela Smialek, 29, on an almost daily basis for four months after he randomly spotted her walking to work and became infatuated.

While never telling Miss Smialek his name, the car wash worker would loiter outside her home in his white BMW, give her flowers, blow kisses at her and repeatedly say how much he ‘loved and missed her’.

He was warned then arrested and bailed by police, but he continued pestering her.

The victim was so fearful of being harmed she shared her phone location with friends so they could ‘find her body’, and she even contemplated taking her own life to end the ordeal.

She eventually found the courage to confront Mohammed and took pictures of him with her phone while shouting: ‘You need to leave me alone!’

Miss Smialek, a finance clerk from Wigan, Greater Manchester, posted the images on social media with the caption: ‘Women of Wigan! This man is dangerous. If you see him or his car, please call 999!’ Mohammed was subsequently re-arrested.

He denied stalking but was convicted by magistrates and sent to Bolton Crown Court, where his sentencing was adjourned pending an appeal last Friday.

Izabela Smialek told the court that her life was upended by the stalking campaign (Picture: Cavendish Press)

Mohammed was seen laughing as Miss Smialek read her victim impact statement out in court.

She told the court: ‘I did not know who this man is or what he wanted from me but he seemed to be everywhere I went.

‘I wanted him to stop and I told him on several occasions to leave me alone but unfortunately the more frustrated I got the more amusement he got of it, and he continued to follow me.

‘He would be there at my home each morning then follow me when I walked to work.

‘Everyone should be able to feel that they are safe from risk of harm and he took that away from me.

‘I don’t drive so I changed my route, used short cuts and side roads but he would still find me and stare at me from his car.

‘For about one three-week period, this man, who I still do not know, was outside my house staring at me and up to my bedroom window. I felt he was trying to watch me getting dressed.’

Mohammed, who is appealing against his stalking conviction, claimed it was just a ‘coincidence’ that he kept seeing her.

At his trial, he represented himself and, speaking through a Kurdish-Surani interpreter, said he was getting abuse on social media after Miss Smialek posted pictures and said he wanted ‘justice’.

Yousif Mohammed, 32, followed Izabela Smialek, 29, on an almost daily basis for four months after he randomly spotted her walking to work and became infatuated.