Will there be a House of the Dragon season 2? Everything we know so far 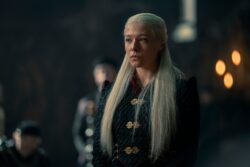 House of the Dragon delivered a brutal first season finale – will there be a season 2? (Pictures: HBO)

*Warning: Contains spoilers for House of the Dragon.*

House of the Dragon’s first season came to a brutal close earlier this week, with its 10th and final episode finally kicking off The Dance of Dragons.

After the death of King Viserys (Paddy Considine), the Greens conspired to crown his son with Alicent (Olivia Cooke), Aegon (Tom Glynn-Carney), king instead of his daughter Rhaenyra (Emma D’Arcy).

However, Aemond (Ewan Mitchell) was already there. When the two sons left Storm’s End on their dragons, Aemond lost control of Vhagar, who gobbled up Lucerys and his dragon.

Is House of the Dragon season 2 happening?

Rhaenyra was set on holding the realm together – but her patience has finally snapped (Picture: HBO)

If you were worried that you were going to be left on a permanent cliffhanger by the events of episode 10 of House of the Dragon, you can calm down.

The show was renewed for season 2 just four days after the premiere, which means we will get to see how the next stage of the conflict plays out.

As it was hinted in the season finale, showrunner Ryan J. Condal has confirmed that House of the Dragon will visit familiar locations from the original show.

Winterfell, Riverrun, the Vale, and Harrenhal were all mentioned by Rhaenyra in the 10th episode, entitled The Black Queen.

Another of the show’s creators, George RR Martin, has revealed that a new character, Daeron Targaryen, will also be joining the cast.

Princess Rhaenys delivered the news that might have just set off the Dance of Dragons (Picture: HBO)

The final moments of House of the Dragon’s first season will be remembered for a long time to come as the war between Rhaenyra and Alicent plays out.

Lucerys, Rhaenyra’s son, and his dragon, Arrax, were both killed by an out-of-control Vhagar in the skies above Storm’s End.

Vhagar’s rider, Aemond, only meant to tease his younger relative by chasing him through the clouds, but the two dragons had other ideas.

Arrax, sensing danger, spat fire at Vhagar, and the old dragon reacted angrily, destroying Arrax in retaliation while Aemond pleaded for him to stop.

The look on Aemond’s face after the tragic incident told us all that he knew exactly how big his mistake was – it’s a mistake that starts a war.

In the very first episode, Viserys told Rhaenyra that dragons are a ‘power men should never have trifled with’. It’s a shame nobody told Aemond.

House of The Dragon is available to stream on Sky and NOW.


MORE : How many episodes are in House Of The Dragon series one?


MORE : Three properties overlooking the House of the Dragon filming location are up for sale