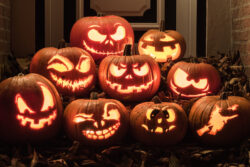 Why do we celebrate Halloween, aka All Hallows’ Eve? (Picture: Getty)

Halloween is here – a time for spooks, scares and surprises.

Halloween has long been a favourite holiday for both kids and adults alike, with picking out pumpkins, carving them, and selecting (or making) costumes part of the exciting build-up.

Many Brits will be keen to go trick or treating or throw a spooktacular Halloween bash in the evening.

Not many people are aware that the popular day has a rather creepy origin, though.

So, why is Halloween on October 31, and why do we partake in the frightful festivities?

So why is it that we celebrate Halloween?

Back in the Celtic days, one of the most important pagan celebrations was Samhain, or the Feast of the Dead.

The festival marked the end of the harvest season and the beginning of winter or the ‘darker half’ of the year, and occurred about halfway between the autumn equinox and the winter solstice.

It is often associated with death, as Celts believed that ghosts returned to the earth on this day.

To ward the evil ghosts and spirits away, people would build huge bonfires where they would gather to burn crops, sacrifice animals, and put on costumes.

In the eighth century, Pope Gregory III made November 1 a day to honour saints and martyrs.

Terrifier 2 really is as gruesome as they say, so take note of the warnings

Unusual pumpkin carving ideas to try at home this Halloween

He made sure All Saints’ Day incorporated some of the traditions of Samhain, to keep peace with the pagans.

Samhain was renamed to All Hallows’ Eve, which eventually evolved to Halloween.

The US adopted Halloween celebrations when the Irish potato famine in 1846 led to mass migration to America.

People dressed up in costumes and knock their neighbour’s doors to ask for money or food, which, in time, transformed to modern day trick or treating.

The event grew to have massive popularity in the US, and eventually became the holiday we know today – a celebration of all the things that go bump in the night.


MORE : Pumpkin carving inspiration to try out this Halloween


MORE : A feast for less: The no-waste pumpkin risotto recipe that will add real flavour to your Halloween


MORE : Looking for a fright night? Ramp up the fear factor with these terrifying Halloween experiences

Can you boo-lieve Halloween dates back over 2,000 years?