Why did Boris Johnson resign as Prime Minister? 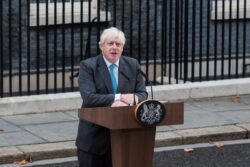 The Tory party is looking for a new leader after Liz Truss stepped down as Prime Minister this week.

She only took the job on September 6, but her position became untenable following U-turns on her controversial mini-budget that triggered an economic crisis.

It now means Tory party members must select a new leader and PM for the second time in 2022 following Boris Johnson’s resignation back in July.

The likes of Rishi Sunak and Penny Mordaunt are expected to be among the choices, but it looks as though Mr Johnson will also be attempting a dramatic comeback.

The nominations will be decided on Monday – October 24 – with Mr Johsnon returning to London after being on holiday in order to launch his new leadership bid.

To be a successful candidate, each nominee needs to secure the backing of at least 100 party members, and the former PM has told allies he is ‘up for it’ in a surprise early comeback move.

But as he looks to re-enter Downing Street, many are wondering why Mr Johnson resigned in the first place.

Here is everything you need to know…

Why did Boris Johnson resign as Prime Minister?

He was essentially left with no other choice after the likes of Rishi Sunak and Sajid Javid triggered a rush of resignations.

A total of 62 of the 179 government ministers vacated their posts in the week building up to Johnson’s resignation.

MPs walking out came after a series of controversial factors that put Mr Johnson’s leadership into doubt across his party.

There was Partygate, when it was discovered the PM and a number of MPs had attended gatherings despite lockdown rules being in place during the Covid-19 pandemic. He was even fined by the Met police for breaking his own laws.

The final nail in the coffin for many was the Chris Pincher scandal, where Johnson’s deputy chief whip was accused of groping two men. Mr Johnson Boris claimed to be unaware of the accusations, but this was later proved to be untrue.

There were also doubts over how well he was suited to deal with the cost of living crisis and rising taxes, with all the factors combining to provoke serious concern over his judgement and integrity.

For many, the thought of Boris Johnson making a comeback so soon after his own party forced him to resign with the likes of Kate Garraway and Ian Hislop expressing their disbelief, despite the fact he does have support from some cabinet ministers.

2pm: The nomination period closes. If only one candidate receives the required 100 or more nominations, they will become the new leader and PM.
3.30pm – 5.30pm: If two or more successful candidates are successful, another ballot takes place.
6pm: Ballot results revealed. If three candidates are in the race, the individual with the lowest amount of votes is eliminated.
6.30pm – 8.30pm: An indicative ballot will take place between the remaining two candidates.
9pm: Results of indicative ballot revealed. If no one withdraws, Tory party members will then vote for their favourite online.

Time TBC: Online voting closes and the winner is announced.

Follow all updates on the Metro.co.uk Conservative Party tag page.


MORE : If Tories think Boris Johnson is the answer they clearly don’t know the question


MORE : Rishi urged to ‘get back together’ with Boris and go back where we started

Mr Johnson could be making a comeback.