Why aren’t the police allowed to go on strike and is any other profession banned? 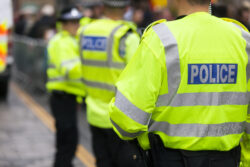 Not everyone can go on strike (Picture: Getty)

Strike action has affected a number of industries across the UK over the past year, and it is very much set to continue into 2023.

Transportation has been greatly affected by strikes on rail networks, bus routes, and national highway workers, as well as border force strikes at Gatwick and Heathrow.

Nurses have also gone on strike for only the second time in the history of the NHS, while ambulance services have also staged walkouts, with further action planned.

Postal workers, G4S employees, Eurostar security personnel, Scottish teachers, and driving examiners have also all walked out as disputes continue between their employers and unions about pay and working conditions.

With so many strikes taking place and even more planned across different industries and work sectors, people may be wondering who can’t go on strike.

Well, one such profession is the police – but why is it that they are not allowed to go

Why aren’t the police allowed to go on strike?

Police and prison officers are banned from going on strike due to a ruling under the Criminal Justice and Public Order Act 1994.

Under Section 127 of the act, it states that a person will be breaking the law if they ‘withhold their services or commit a breach of discipline’ as the service they provide is deemed too important.

The ban on police officers striking actually dates back even further than 1994, as it was first introduced in 1919.

The police have been banned from striking since 1919, when the Police Act was first established.

The act was established after strikes in London and Liverpool during 1918 and 1919, when almost every constable and sergeant refused to go on duty due to disputes over pay.

The Prime Minister at the time, David Lloyd George, did give in to the demands, but within months the union was smashed and the police federation established.

Police officers can take some industrial action including withdrawing from voluntary posts, such as policing football matches.

In 2013, the Police Federation of England and Wales balloted members to see if they would like the right to strike, but it did not gain enough signatures to change the law.

What other professions can’t go on strike?

Train strikes in particular have become a common occurrence over the last year (Picture: PA)

Police and prison officers are the only professions legally banned from striking, although other professions have agreements with the government.

The Royal College of Nursing has a ruling that nurses can only walk out where it is not detrimental to the well-being of patients.

In regards to the recent nurses’ strikes, plans were put in place ahead of the strike action to ensure the safety and care of patients were minimally affected.

Hospitals provided a weekend or Bank Holiday level of care.

Body found in pond now being treated as murder

Non-urgent operations were postponed as well as outpatient visits and sessions of chemotherapy and kidney dialysis.

In light of the recent strike action from major services such as ambulance workers, the government has reportedly been exploring the idea of significantly restricting or even banning the right of ambulance workers and firefighters to go on strike.


MORE : Are Tubes running this week amid train strikes?


MORE : All the strikes planned for January 2023 – from trains and roads to teachers and ambulance staff

The police are banned, but is anyone else?