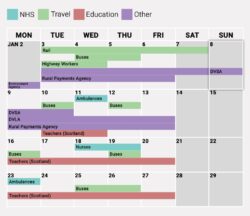 By the standards of the past few weeks, today is a quiet one when it comes to strikes.

Everyone from railway workers and civil servants to nurses has staged industrial action for months, often because of pay and declining working conditions.

Today, driving examiners in London, the South East, South Wales and the South West are walking out.

Driver and Vehicle Standards Agency (DVSA) workers who are part of the Public and Commercial Services (PCS) union have been striking since December.

Different agency workers from different regions have walked, with those in London and southern England and Wales striking since January 4.

Learning drivers are being urged to check if their practical test has been cancelled or rescheduled as transport workers join other civil servants in a series of strikes.

DVSA workers have staged a raft of strikes for weeks (Picture: Getty Images)

If the DVSA hasn’t contacted you, the agency recommends you still go to your appointment as normal.

Timeline of strikes over the next few weeks

London bus workers at Abellio to go on strike.

EIS, joined by the Scottish Secondary Teachers’ Association, will stage another national strike in secondary schools and secondary special schools.

RPA staff will continue their walkout.

Workers on London’s Elizabeth line will go on strike.

RPA staff will continue their walkout.

EIS to stage a national strike for 16 consecutive days until February 2, which will see members in two local authorities strike each day.

Royal College of Nursing (RCN) members in England will strike.

RCN members in England will continue their strike.

Unison members working for five ambulance services in England will stage another walkout.

London bus workers at Abellio will continue to strike.

Civil servants from more government departments and agencies will move to strike again in the week ahead, joining bus workers and ambulances.

He said Friday he wanted a ‘grown-up conversation’ with unions on public sector pay settlements for the financial year starting in April.

Talks must focus on ‘what’s affordable ’ and ‘what’s responsible’ for the country.

Emma Runswick, deputy chair of council at the British Medical Association, which represents doctors, said the talk offer was ‘laughable’.

Don’t expect too much disruption today.