Who’s on strike today and how will it affect you? Daily update for December 25 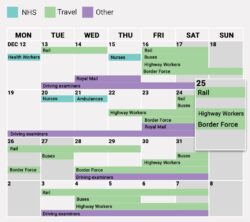 Merry Christmas – one and all!

Unions are continuing to fight for better pay and working conditions throughout the festive period.

Those responsible for programming electronic signs that provide information about speed limits and lane closures – who work closely with emergency services to monitor the roads – are among the striking staff.

There have been warnings over potential delays on the road as a result of the protests.

However, the pocket of strike action just affects London and the south east rather than the entire country.

A series of strikes have taken place across the United Kingdom this winter (Picture: PA)

PCS general secretary Mark Serwotka said: ‘Our members are telling us they have to cut back their spending at Christmas time because they are running out of money. They have been offered a below-inflation pay award, at a time when inflation is higher than 10%.’

Meanwhile, more than 1,000 Border Force staff belonging to the Public and Commercial Services union (PCS) are taking part in strike action over eight days of the festive period.

Six airports across the country are affected.

Army personnel and government staff will be drafted in to check passports at arrivals halls during further walkouts between December 23 and New Year’s Eve.

The decision has sparked outrage among members of a different union – The Union for Borders, Immigration and Customs (ISU) – which is not taking part in this month’s industrial action.

Lucy Moreton, professional officer at the ISU, said: ‘Historically, we have been in existence 40 years and only taken strike action three times over that period.

‘Generally, our membership is not very militant but they are also massively committed to national security.’