Where did Prime Minister Rishi Sunak go to school? 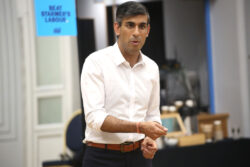 Rishi Sunak is the UK’s next Prime Minister, after two recent bids for the Conservative leadership.

During the first leadership challenge, which ended in September 2022, he and now-outgoing PM Liz Truss both had their educational backgrounds discussed as a hot topic.

Former Chancellor Mr Sunak was educated at a fee-paying public school in Winchester, while Ms Truss received backlash after saying children were ‘let down’ by her Leeds comprehensive Roundhay School.

Now that Mr Sunak is to take on the top government job, many will want to know about where he studied.

Here’s all you need to know.

Where did Rishi Sunak go to school?

Rishi Sunak has become the new UK Prime Minister after winner the Tory leadership race. So what happens next?

However, in 1989 he moved to Stroud School in Hampshire, after the former closed down.

A 2020 biography of Mr Sunak, called Going For Broke: The Rise of Rishi Sunak, noted that he was Stroud’s head boy, captain of the cricket team, and a fan of football, hockey and athletics.

Today, the school describes itself as ‘a non-selective co-educational school for children ages three to 13, set in 22 acres of rural Hampshire. It is the preparatory school for King Edward VI School in Southampton.’

In the early 1990s until around 1998, Rishi attended Winchester College, a prestigious Hampshire public school.

Tatler described Mr Sunak missing out on a scholarship after being accepted to study at Winchester – reporting in a feature that ‘his parents decided to take on the high fees themselves’.

To attend today, a year boarding at Winchester College (as Mr Sunak did) would set you back an eye-watering £45,934 – with a slightly smaller sum of £33,990 for day pupils.

That said, it’s not entirely clear how much it would’ve cost three decades ago.

After this, he became a Fulbright Scholar, allowing him to study at Stanford University in California – where he earned a Masters degree in Business Administration.

What has Rishi Sunak said about his school?

Back in April 2022, Mr Sunak spoke about Winchester College in an interview with Sky News.

The then-Chancellor told the outlet: ‘It was an amazing opportunity.

‘I was really lucky… it was something that was really extraordinary. It certainly put my life on a different trajectory… it’s part of the reason I’m sitting here. I’m really grateful.

‘I look back on that time, it’s helped make me who I am as a person. I’m sure it helps me do the job [of Chancellor] in the way I do it.’

Around this time, it was revealed that Mr Sunak and wife Akshata Murthy had donated more than £100,000 to the school.

Mr Sunak has also spoken about his education during leadership debates in July and August, saying during a BBC tussle with Liz Truss: ‘My parents were part of an immigrant family that came here.

‘They didn’t start with very much, but they worked day and night, saved and sacrificed to provide a better future for their three children.

‘And I am nothing but enormously grateful for everything that they did for me. I’m certainly not going to apologise for the fact that they worked hard, and they aspired to do that for their kids.’

On his website, Mr Sunak also adds: ‘My parents sacrificed a great deal so I could attend good schools.

‘I was lucky to study at Winchester College, Oxford University and Stanford University. That experience changed my life and as a result I am passionate about ensuring everybody has access to a great education.’


MORE : How many Prime Ministers has the UK had?


MORE : Who are Rishi Sunak’s parents? Everything you need to know about the Tory candidate’s life growing up with his siblings