When is the FA Cup fourth round draw? Start time, TV channel and ball numbers 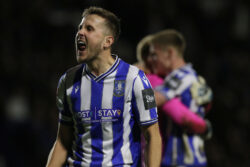 The third round of the FA Cup has been taking place this weekend, with the oldest cup competition in football having produced some unlikely upsets.

League One side Sheffield Wednesday dumped out Premier League high-flyers Newcastle on Saturday evening, whilst National League side Wrexham overcame Coventry City of the Championship in a dramatic encounter in the West Midlands.

The likes of Tottenham, Manchester United and Leicester have booked their place in the fourth round, with the remaining third round fixtures set to take place across Sunday and Monday.

But when exactly is the draw for the next round?

Here is everything you need to know.

When is the FA Cup fourth round draw?

The draw for the fourth round of the FA Cup will be held just before Sunday’s final TV fixture, Manchester City vs Chelsea, which is scheduled to kick-off at 4.30pm at the Etihad Stadium.

The draw itself is set to take place at around 4.05pm, with host Mark Chapman joined by pundits Emile Heskey and Karen Bardsley to help pick the balls out of the hat.

Wrexham overcame the odds to reach the fourth round (Picture: Catherine Ivill/Getty Images)

How to watch the FA Cup draw on TV

The draw will be shown live on BBC One as part of the coverage for the heavyweight match in Manchester.

Fans can also live stream the draw on the BBC Sport website and BBC iPlayer.

What are the ball numbers?

What are the FA Cup fourth draw ball numbers?

The full list of ball numbers are as follows:

Which FA Cup third round games are on TV this weekend?

When is the FA Cup fourth round?

The exact kick-off times and TV schedule will be announced in due course following the completion of the draw.


MORE : ‘As bad a mistake as you will ever see!’ – Liverpool goalkeeper Alisson slammed for FA Cup error against Wolves