When did Doctor Who first start and how many Doctors have there been? 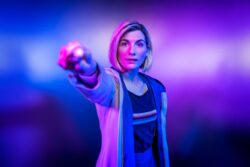 Jodie Whittaker is set to bow out as the Doctor, but who came before her? (Picture: BBC Studios / James Pardon / Matt Burlem)

Jodie Whitaker is set to make her final outing tonight (October 23) as Doctor Who in a 90-minute special episode.

As The Thirteenth Doctor, she made history in 2017 as the first woman to play the role.

And now in her final story, The Power of the Doctor, the Doctor will take on three of the franchise’s most infamous enemies – the Daleks, the Cybermen, and the Master.

After regenerating at the end of the episode, the iconic role of the Doctor will be portrayed by 30-year-old Sex Education star Ncuti Gatwa after Jodie’s final appearance in the iconic role.

This will make Ncuti the first black Doctor Who.

But how many Doctors have come before? And how can the show explain away so many iconic casting changes?

When did Doctor Who begin?

The first season of Doctor Who was originally broadcast on BBC on November 23, 1963.

The first ever episode was titled An Unearthly Child and the first series ended with The Reign of Terror on September 12, 1964.

William Hartnell was the first actor to play the Timelord.

The show was cancelled in 1989 after lasting for 26 years but was later revived in 2005 by showrunner Russell T Davies, who is returning to helm the show in 2023.

How many actors have played Doctor Who?

In total, there will have been 14 people playing Doctor Who – once Ncuti’s officially takes on the role of Doctor number 14.

Before Jodie became the first female Doctor, the previous 12 Doctors were all men.

Jodie took over for Peter Capaldi, who played The Twelfth Doctor from 2014 to 2017.

Peter replaced Matt Smith, who shot to fame in his role as The Eleventh Doctor from 2010 to 2013.

Matt’s since gone on to find Hollywood game as Prince Philip in Netflix’s The Crown and as Daemon Targaryen in Game Of Thrones prequel House Of The Dragon.

The other Doctors, in order, are:

David Tenant played the Doctor when the show returned in 2005 (Picture: BBC)

Other ‘unofficial’ Doctors have popped up from time to time (it’s time travel, it gets complicated).

The late John Hurt played a version known as The War Doctor in a series of 2013 specials while Jo Martin played a previously unknown version of The Doctor in series 12 known as the Fugitive Doctor.

It had a TV movie in 1996 before it was rebooted in 2005, and 13 further series have aired since… so with 38 seasons total, it makes sense there have been so many different Doctor actors.

Fortunately, the switch-up in cast is explained away in the plots by a concept called ‘regeneration’.

When everybody’s favourite alien Time Lord is gravely injured, they can be sort-of reborn and appear as a new human body, almost like a reincarnation.

Doctor Who airs tonight at 7.30pm on BBC One.


MORE : What time is Doctor Who: The Power Of The Doctor on?


MORE : Doctor Who showrunner hits back at ‘woke’ criticism: ‘The world has changed, not the show’


MORE : Want to appear in EastEnders or Doctor Who? Here’s how you can apply

*Who* has played the once-in-a-lifetime part?