When could the new series of The Masked Singer start as The Masked Dancer comes to an end? 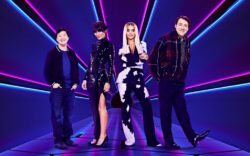 The Masked Dancer 2022 is finally coming to an end, and we’ll know who the celebrities behind Scissors, Onomatopoeia and Pearly King are.

But if the guessing games and cryptic clues have been keeping you entertained, there’s not too long to go before The Masked Singer returns to our screens.

And now we’re ready for it to happen all over again.

When could the new series of The Masked Singer start?

While season four of The Masked Singer UK has yet to have a release date announced, the production company behind the programme confirmed that the show will be returning for two more seasons.

Season three began on New Year’s Day earlier this year, so we presume the next season will be landing at a similar time in early 2023.

While 2023 might seem a long while away, in a strange turn of events, a Masked Singer crossover with I’m A Celebrity… Get Me Out of Here! is hitting our screens for a one-off special this autumn.

The two ITV shows will collide as I’m A Celebrity contestants dress up in extravagant outfits – inspired by Australian culture, naturally – while the panel and audience tries to guess who is behind the mask.

The programme is set to celebrate I’m A Celeb’s return to Australia this year, after a two-year hiatus where Ant and Dec hosted the show from Wales due to the coronavirus pandemic.

Katie Rawcliffe, ITV’s Head of Entertainment Commissioning said: ‘What a perfect way to celebrate the return of I’m A Celebrity…Get Me Out of Here! than with a unique mash up of two hugely successful series.

‘Viewers will get to enjoy all things Jungle with a wonderfully bonkers Masked Singer twist.

‘With flamboyant costumes that pay homage to the iconic series as it returns to Australia, families will be able to play alongside our panel in TV’s favourite guessing game.’

The I’m A Celebrity…Get Me Out of Here special of The Masked Singer will be released on ITV and ITV Hub in the autumn.


MORE : Joel Dommett unsure The Masked Singer will beat ‘juggernaut’ Strictly at the NTAs: ‘There’s nothing like hosting a show, then losing…’


MORE : Could there be another series of The Masked Dancer?