What time is the New Year’s Day Parade in London and how can you watch it? 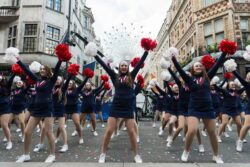 While a lot of Londoners will be sleeping off New Year’s Eve hangovers today, others will be up and about making good on their resolutions.

Part of that might be taking better advantage of living in a dynamic city like London, so what better way to start than attending the annual New Year’s Day Parade?

London’s New Year’s Day Parade started in 1987 and has taken place every year since then until January 2021 when it was cancelled due to Covid.

With it returning bigger and better than ever this year, here’s all the details you need to know…

Where does the New Year’s Parade take place?

The parade takes place in the heart of London, covering such central locations as Regents Street and Trafalgar Square.

The route begins at Piccadilly, right outside the famous Ritz hotel. It then heads east to Piccadilly Circus, before moving south down Regent Street St James’s. Then it’s left down Pall Mall, past Trafalgar Square, and along Whitehall to the finish point at Westminster.

What time is the New Year’s Day Parade in London?

The parade kicks off from 12pm today, New Year’s Day.

However, if you were planning to go and see the parade in person, you might want to get to central London a bit earlier to guarantee a good spot.

From marching bands to groups including Scouting for Girls, there’s a whole host of people taking part in today’s parade.

For fans of BBC’s The Traitors, Welsh Dragon queen Amanda announced on her social media that she and fellow cast member Kieran will be appearing at the parade.

How can you watch the New Year’s Day Parade?

Spectators can go and watch for free if you’re near the capital. Freestanding places throughout the route are free, but are expected to fill up early.

Every year, tickets can be purchased ahead of time for VIP seating – though these are sold out now.

If you want to watch from the comfort of your own home, you can livestream the parade through their official YouTube.


MORE : Why is it bad luck to clean on New Year’s Day?

What better way to kick off a new year than with a parade!