What really was the Ancestor? The Rig’s explosive ending explained 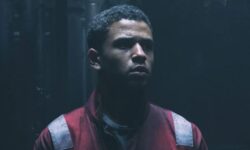 Baz is one of the crew infected by the fog (Picture: Amazon Prime Video)

Well what a ride The Rig was, boasting a stellar cast, including Martin Compston and Emily Hampshire, and a mind-bending supernatural plot, fans were certainly left at the edge of their seats.

The Amazon Prime drama started with a group of unsuspecting oil workers stationed on a rig off the Scottish coast in the dangerous waters of the North Sea, due to be collected and returned home.

However, while they await their transport back to the shore, they are stuck by a thick fog, which completely engulfs them and cuts off their communication systems.

The crew endeavour to work out what’s behind this mysterious weather, but not before the fog seemingly infects some of the team, including Baz (Calvin Roberts).

After the substance makes its way through a wound, Baz suffers what should have been a lethal fall from a crane, but instead his body miraculously heals itself, with Baz becoming taunted by messages and visions.

Similarly, alcoholic Leck (Emun Elliot) ingests some of the fog, but has an adverse reaction to it, with his fillings falling out of his mouth and his tattoos seeping from his skin, before he dies.

This isn’t the only fatality on board, however, as Alywn (Mark Bonnar) desperately tries to coax a seemingly possessed Baz back onto deck, who responds by murdering him.

Baz, who has camped out on another part of the rig away from his team, continuously warns them of a ‘wave’, and hints that danger is on its way.

Communications officer Fulmer (Martin Compston) is another victim of the fog and, while he sees visions and his body self-heals, it isn’t at the same rate as Baz, with scientist Rose (Emily Hampshire) realising he could be used as a messenger with the force.

Rose is desperately scrambling to find out what exactly the fog is, discovering it has bionic properties and attaches itself to a host, which it will kill, like Leck, if it is unhealthy.

After both Baz and Fulmer keep seeing circles, a camera is sent to the ocean floor where they see a magnificent, huge organism, which they name the Ancestor.

Rose works out the circles, seen by Baz and Fulmer and on the Ancestor, represent ancient epochs, suggesting that it is a lifeforce that dates back billions of years.

Elsewhere, for the first time, the crew receives signal, with pregnant doctor Cat (Rochenda Sandall) managing to have a video call with her partner.

She learns that the strange weather and power cuts they are experiencing on the rig are not exclusive to them, and are happening across the coastline, also affecting her wife.

Iain Glen plays Magnus who is in charge of the Rig (Picture: Amazon Prime Video)

When the power cut resumes, the team on the rig spot a lifeboat coming their way, helmed by oil company exec Coake (Mark Addy), who have fled from another station.

Bullish Coake wants to kill the Ancestor – at whatever cost – partly because it is spreading across the North Sea and turns oil into organic property, costing the company billions.

Rose and Magnus (Iain Glen) disagree, with Rose pointing out that the Ancestor has lived for many years, and withstood other human challenges.

Instead of battling against it, they need to communicate with it, and Rose, Magnus and Fulmer rush down to the bottom deck to work with Baz and the Ancestor.

Meanwhile, Coake is securing rescue – for himself – via a helicopter, while the rest of the crew catch on and then rush up to the top deck to also secure a spot.

Despite having a slight connection with the Ancestor, Rose, Magnus and Fulmer are running out of time as a huge Tsunami, which has been triggered by the life force in reaction to the drilling, is heading their way.

What are you theories about the ending of The Rig?Comment Now

Having no choice, the trio also rush up to be saved by the helicopter, while Baz opts to remain on board the rig, close to the Ancestor he feels an intense kinship with.

Fortunately, the crew all made it on the chopper just moments before a thundering wave obliterates the rig, before making its way to the coastline – and Cat’s partner.

Coake said if they had wanted to go home (which has now been presumably destroyed) they should have listened to him all along as they fly to a mysterious destination.

Where could they be headed? If there’s a series 2, I’m sure we’ll find out.

The Rig is available to stream on Amazon Prime.


MORE : Martin Compston reveals exactly what happened when he went up in flames in shocking The Rig scene