‘We were lucky!’ Mike Arteta reveals the key Arsenal partnership that ‘clicked from day one’ 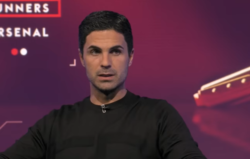 Mikel Arteta has benefited from a stroke of luck with his burgeoning central defensive partnership (Picture: Sky Sports)

Mikel Arteta has conceded he ‘got lucky’ with the way in which Arsenal’s new-look central defensive partnership clicked from day one.

The return of William Saliba from his loan spell at Marseille presented Arteta with something of a dilemma in pre-season having invested £50million in Ben White the previous summer.

Arteta opted to place his faith in a new-look centre-half combination of Saliba and Gabriel Magalhaes, with White shunted to right-back in the absence of the injured Takehiro Tomiyasu.

That gamble has been vindicated with Saliba emerging as one of the starts of Arsenal’s season to date and his partnership with Gabriel Magalhaes showing huge signs of promise.

Asked what Saliba has brought to Arsenal’s defence this season, Arteta told Sky Sports: ‘It wasn’t that anything was lacking it’s just the qualities that he’s brought.

‘I don’t see the centre back position as something that is individual. It is a partnership and that partnership has to exist there has to be some sort of chemistry and understanding.

‘The qualities of those two have to be complementary and from day one those two clicked.

Mikel Arteta explains the decision to give midfielder Granit Xhaka a new role in the team ð pic.twitter.com/Ak4Jd0dGdj

‘You cannot predict that when you are looking in the market or you have player who is back from a loan and we were lucky to be fair with that.

‘What he’s brought is physicality, game understanding and then a lot of composure.

‘He’s happy to defend open spaces and one vs one situations. He’s extremely good at making decisions when he only has a split second.’

Arteta believes Saliba’s impact has been particularly impressive given the position he plays in which he views as the toughest in the Premier League.

He added: ‘I think the position has evolved a lot. I always say in the Premier League the hardest position to play in a centre back.

‘You can do exceptionally well at everything that we ask and then you just need one action where you give someone half a yard in the box to somebody, he outjumps you and he scores a goal and then you are in all the highlights of the game.’


MORE : Mikel Arteta explains why he turned down chance to work at Arsenal under Arsene Wenger