The Met Police breached the rights of the organisers of a vigil for murdered Londoner Sarah Everard in its handling of the planned event, High Court judges ruled.

Reclaim These Streets (RTS) had proposed a socially-distanced vigil for Everard near to where she was kidnapped in Clapham, south London. The four women who founded RTS and planned the vigil withdrew from organising it after being told by the Met they would face fines of £10,000 each and possible prosecution if the event went ahead.

A spontaneous vigil and protest took place instead. The Met’s handling of the vigil for Sarah Everard has been widely criticised.

The family of Sarah Everard paid tribute on 3 March, marking the first anniversary of her murder by a British police officer. Her family said, “We miss her all the time”.

“It is a year since Sarah died and we remember her today, as every day, with all our love,” her family said.

“Our lives have changed forever and we live with the sadness of our loss. Sarah was wonderful and we miss her all the time.

“Over the past year, we have been overwhelmed with the kindness shown to us, not just by family and friends, but by the wider public.

“We are immensely grateful to everyone for their support, it has meant such a lot to us and has comforted us through this terrible time.

“Sadly, Sarah is not the only woman to have lost her life recently in violent circumstances and we would like to extend our deepest sympathy to other families who are also grieving.”

What happened to Sarah Everard?

Wayne Couzens used his warrant card and handcuffs to snatch Everard off the street using Covid lockdown rules to make a false arrest. He then drove from London to Kent where he raped and murdered Everard, and later burnt her body and dumped her in woodland.

He was handed a rare whole-life term in September, which he is attempting to appeal.

Reclaim These Streets – victory for women!

BREAKING: We have won our High Court case against the @metpoliceuk pic.twitter.com/1zMua3PQc2

The National writes the legal aid bill to pay for the defence of Wayne Cozens has so far topped £30,000. The tax payer-funded sums are paid to his defence lawyers. Couzens is appealing his sentencing (having been handed a rare life term) – his appeal is to be heard at the Court of Appeal in early May.

The i writes Reclaim These Streets brought a legal challenge against the force over its handling of the planned event in March 2021.

The Metropolitan Police breached the rights of organisers of a vigil for Sarah Everard with its handling of the planned event, High Court judges have ruled. 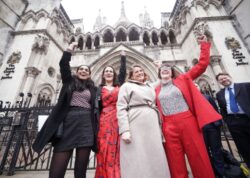 YorkshireLive writes Sarah Everard killer Wayne Couzens allowed to get Xbox in prison cell for ‘good behaviour’. The Mirror reports that an insider said that Wayne Couzens, 48, was annoyed after being barred from playing violent games.