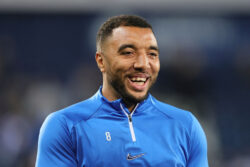 Troy Deeney expects Arsenal to drop out of the Premier League title race and eventually finish the season in third place.

The Gunners have enjoyed their best ever start to a top flight campaign and sit five points clear at the summit of English football having lost just one of their 15 games this term.

Manchester City remain on their heels with the two set to meet on 15 February at the Etihad Stadium – a fixture originally set to take place in September but was postponed following the death of the Queen.

Deeney, who has had his share of run-ins with Arsenal over the years after his infamous ‘cojones’ remark in 2017, is confident however Manchester City will cut the gap. The former Watford skipper also believes that when that does happen, Arsenal will begin to feel the pressure and crumble.

‘Buying new players to bolster their squad is all well and good, but it is about bringing in new players and maintaining the consistency they have had so far this season,’ Deeney wrote for The Sun.

‘They don’t need too many additions, but if they do sign someone else, how does that dynamic change things? They have a happy squad, and you need to keep it that way.

‘There is a growing expectation that Arsenal really can do it the longer they are top, and if they come out of the next month unscathed, I will start believing.

Arsenal have a five point lead at the top (Picture: Getty)

‘But I just wonder that if City catch them, and I believe they can, will Arsenal recover from it? I actually feel they will finish as low as third come the end of the season.’

City could reduce Arsenal’s lead to two points when they take on Everton on Saturday afternoon, with the Gunners facing a tricky test away to Brighton later in the evening.

Mikel Arteta’s side lost 3-1 to the Seagulls in a Carabao Cup tie earlier in the season but will be boosted by news that Roberto De Zerbi will be without four key players.

Moises Caicedo meanwhile will serve a one match suspension.

The former Watford man believes City will defend their title.