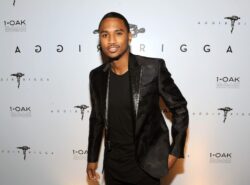 Trey Songz voluntarily turned himself into police after an incident at a bowling alley, it has been claimed.

The Na Na singer – real name Tremaine Neverson – was charged with assault amid claims he punched a woman in the bathroom of a New York bowling alley in October.

She is thought to have been hospitalized following the alleged incident.

According to TMZ, the 38-year-old also attacked a man at the venue – who refused medical treatment.

It is not clear what led to the alleged attack, but the musician reportedly turned himself into a police station in New York a few weeks after, where law enforcement source said that he was booked on assault charges and then released.

Trey’s attorney, Mitch Schuster, told the outlet: ‘We have been proactively communicating with NY law enforcement, the DA, and all those involved.

He reportedly turned himself into NYPD (Picture: Getty)

‘While we will respectfully and proactively work through all the appropriate channels we are confident that Trey will be fully cleared of any wrong doing.’

The allegations come after the star was cleared over sexual assault claims in Las Vegas, stemming from accusations made in 2021.

During a trip to the city last November, to celebrate his birthday, he was accused of misconduct.

A spokesperson for the Las Vegas Metropolitan Police Department confirmed to Metro.co.uk in April of this year that he had been cleared.

‘The LVMPD has concluded the investigation into the sexual assault allegations against Tremaine Neverson and determined that no criminal charges will be filed,’ a spokesperson said in a statement.

‘If any new evidence comes to light, the case will be reopened for further investigation.’

Metro.co.uk has contacted Trey Songz’ reps for a comment.