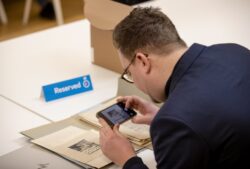 Treasure hunters have been flocking the National Archives to look at the maps (Picture: Hollandse Hoogte/Shutterstock)

Would you travel across the world, led by an old map where an X marks the spot of a treasure?

This is at least what people did after a trove of documents indicating where Nazi loot may have been hidden was released in The Netherlands.

Treasure hunters headed to the small Dutch village of Ommeren to look for the World War II gold and jewels.

At least 15 people have had a police warning and another 100 – including Brits – have been discovered, shovel in hand, often at night, digging up private gardens and public land, the Telegraph reported.

The treasure – four ammunition cases laden with coins, watches, diamonds and other gemstones – is thought to be worth nearly £16 million.

It is believed to have been stolen after a bank was bombed in the city of Arnhem.

The map to the possible Nazi treasure in Ommeren (Picture: Hollandse Hoogte/Shutterstock)

As the Nazis fled occupied Europe in the final days of the war, German soldiers are believed to have buried the loot in the Dutch countryside.

Some 80 years later, the National Archives of the Netherlands released a trove of documents, including a hand-drawn map.

There are a number of theories about where the money is, and some say it may have already been uncovered without the government’s knowledge.

But it has been searched for several times previously, according to the National Archives.

Coral reefs are ‘under threat’ from hidden heatwaves, warn scientists

Dutch authorities have now been forced to ban to use metal detectors or digging without a permit, adding that any finds must be reported.

‘This is an archaeological area. We want to protect the ground.’

Meanwhile, police warned of ‘dangers due to the possibility of unexploded bombs, landmines and grenades’.

The treasure is thought to be worth nearly £16 million.