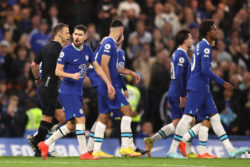 Chelsea were held to a 1-1 draw by Manchester United (Picture: Getty)

Tony Cascarino slammed ‘totally off the pace’ Pierre-Emerick Aubameyang and two other Chelsea players after Graham Potter’s side drew 1-1 with Manchester United at Stamford Bridge.

Chelsea thought they had edged a cagey affair in west London when Scott McTominay was penalised for grappling in the box and Jorginho slotted home an 87th-minute penalty.

But Erik ten Hag’s Manchester United scored a dramatic injury-time equaliser through Casemiro to deny Chelsea victory and earn a share of the spoils.

Former Chelsea striker Cascarino believes Potter will be somewhat concerned by his team’s performance in front of goal and said deadline-day signing Aubameyang was ‘totally off the pace’.

‘I think Graham Potter is going to be bothered about the ability of his forward line to get goals,’ Cascarino said.

‘Aubameyang has not really got going yet, yes he’s had a couple of moments but he was totally off the pace yesterday. Sterling isn’t playing particularly well either, he’s running into defenders more often than not.

‘These are top players and players you expect so much more from. Chelsea don’t look like they’ve got goals in them.

‘They’ve lost Reece James who is a big outlet for them but generally they don’t look like they’ve got goals in them.’

Cascarino says United’s late equaliser was a ‘hard one to swallow’, especially as he thought Blues goalkeeper Kepa Arrizabalaga should have saved Casemiro’s header.

Kepa has largely impressed since coming back into the side for Edouard Mendy but Cascarino feels the Spaniard ‘did not cover himself in glory’ for the Manchester United goal.

‘The goal is a hard one to swallow because Kepa has played really well of late,’ Cascarino added. ‘I’m not sure he’s covered himself in glory with the goal.

‘It was a good header but I think Kepa should have done better, he was flat-footed. Graham Potter will be really disappointed because Chelsea are quite capable of keeping clean sheets.’

Chelsea won their first four Premier League games under Potter but dropped points away at Brentford before the Manchester United clash.

Reflecting on Chelsea’s draw with United, Potter said: ‘Lots of positives in terms of the amount of effort the boys put into the game. Manchester United were better than us for the first 30 minutes and we had to respond and I felt we did that.

‘It wasn’t from a lack of trying. The boys gave everything, when you score as late as you do there is a feeling you’ve dropped points but over the course of the game a point is probably about right.

‘When we scored, because of how hard fought it has been it is hard to control things going into the box. We have to accept the point and dust ourselves down to go again on Tuesday.

‘I can’t stand here and say we deserved to win. The two teams had a go and a point is about right.’

‘Graham Potter will be really disappointed.’